by Mark Mancini
Next
Who wouldn't love that face? Despite its size, the hellbender (Cryptobranchus alleganiensis) is harmless to people and serves as an indicator species – the strength of the hellbender population is an indicator of stream health. Brian Gratwicke/Flickr (CC By 2.0)

Picture a remote freshwater stream somewhere in the eastern U.S. The water's cool, there's a reasonably fast current and the bottom is littered with big, flat rocks. Sounds peaceful, doesn't it?

What you're imagining is a perfect environment for trout — and something else, besides. Every so often, anglers who cast their lines in such places wind up catching North America's biggest salamander.

And boy, can this thing leave an impression. Specimens measuring 29 inches (73 centimeters) long have been documented and the beefiest adults weigh 4 or 5 pounds (1.8 to 2.3 kilograms).

These four-legged amphibians have compressed heads and torsos and, judging by outward appearance, you'd think someone grabbed these critters and squished them flat with a rolling pin. Another key attribute is their brown-to-grayish skin, which hangs noticeably loose around the flanks.

Early settlers didn't know what to make of these guys. Baffled by their appearance, some folks began calling them "snot otters," "devil dogs" or "mud-devils." The species wouldn't receive its formal scientific name — Cryptobranchus alleganiensis — until 1803. Nowadays, most people know this strange salamander as the "hellbender."

Hellbenders are divided into two subspecies. Northern Arkansas and southern Missouri are the home of the endangered Ozark hellbender. Meanwhile, the eastern hellbender has a broader distribution, having spread itself across the greater Appalachian region and parts of the Midwest. Sadly, it's also got conservationists worried.

Some amphibians are equally at home on land and in the water. But hellbenders are (more or less) totally aquatic. Their skin absorbs oxygen, pulling it straight out of the water. That leaves hellbenders at the mercy of pollutants. And the excess silt dumped into their streams by forest-clearing projects sure doesn't help.

One report, published in 2007 by the U.S. Fish & Wildlife Service, estimated that the Ozark hellbender will become "functionally extinct" by the year 2026 — unless proactive measures are taken. As of 2019, it was still classified as endangered by the U.S. Fish and Wildlife Service, which has said that, in some good news, most populations of the eastern hellbender are not in danger of extinction and therefore do not warrant listing under the Endangered Species Act. To help boost populations of the Ozark hellbender, the St. Louis Zoo teamed up with the Missouri Department of Conservation and established a successful breeding program in 2011.

At up to 29 inches (73 centimeters) in length, the eastern hellbender is an impressive specimen, but is harmless to humans.
Gary Peeples/USFWS/Wikimedia Commons (CC By 2.0)

And just last year, Pennsylvania raised awareness about this wonderful species by naming the eastern hellbender its official state amphibian.

Maybe such efforts will improve the salamander's PR. There's a pervasive belief that Cryptobranchus alleganiensis has a venomous bite. But this is untrue — the hellbender wields no venom. And despite rumors to the contrary, the amphibians don't hurt game fish populations.

Crayfish make up over 90 percent of the hellbender's diet. Other potential prey items include tadpoles, smaller salamanders and little fish. The creatures are most active at night; they spend their days taking refuge under submerged logs or stream-bottom rocks. Hellbenders avoid humans, but the animals do stake out territories of 344 to 3,724 square feet (32 to 346 square meters) and aggressively defend them against other members of their species.

So unless you're a rival salamander, a potential mate or a yummy crayfish, these beasties would just as soon leave you alone. Disposition-wise, they couldn't be less hellish. Maybe it's time to start calling them "heckbenders."

The hellbender's no pushover, but it's utterly dwarfed by the Chinese giant salamander. Multiple species exist, with the very largest attaining lengths of 5.9 feet (1.8 meters). 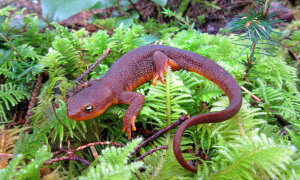 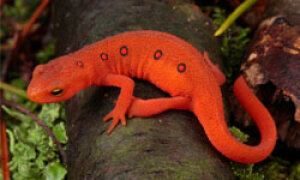 How to Care for a Salamander