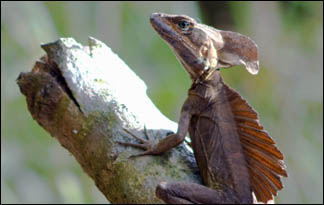 Coming in at No. 10 in our countdown of animal skills is a Central American lizard with an unusual habit. The plumed basilisk spends much of its time in streamside trees or shrubs waiting for an insect or small vertebrate to pass close enough so it can pounce and devour it. But when the lizard is threatened, it drops down into the stream and escapes by walking across the water on its hind feet, using its tail for added support. Aptly nicknames the "Jesus Christ lizard," this beautiful turquoise-green reptile is also known for its running speed on land - up to 7 miles per hour - and for its ability to remain submerged underwater for up to 30 minutes. 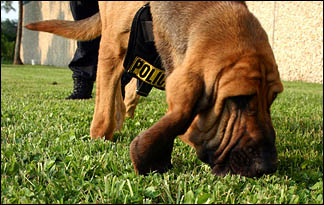 Under the sleepy eyes of the bloodhound is sits the nose of a super-detective, with a sense of smell up to a million times more sensitive than that of humans. Because of the bloodhound's fine-tuned olfactory system, it is commonly used by police officers to track down the scents of missing or fugitive people. Its nose has more than 200 million olfactory cells, which can lock onto an odor and follow it for several days, despite the presence of other scents along the way. This keen sense of smell, along with the bloodhound's tenacity, makes it the ideal tracking dog. 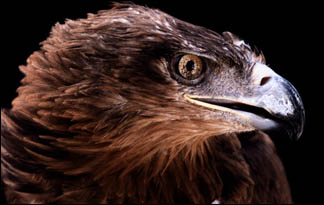 All birds of prey have very keen eyesight, which they rely on in order to find prey, but eagles are especially gifted in the visual department. By some estimates, eagles can see at least four times as much detail as humans. This is due to a few essential anatomical adaptations: large pupils that minimize diffraction, a ridge over each eye that shields sunlight and a higher concentration of cone cells in the eye. The result is incredible accuracy in locating prey, often at a distance of hundreds of yards. Hence we have the term "eagle eye" for people who display sharp vision. 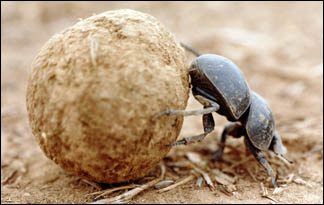 Dung beetles are already world-renowned for their ability to roll a ball of excrement across great distances, but recent evidence suggests that a certain species of dung beetle (African Scarabaeus zambesianus) may be capable of another impressive skill: navigation using polarized light from the moon. These insects are often observed to travel in a straight line with their dung balls, despite whatever obstacles they may encounter. It seems that these insects rely on the patterns created when moonlight interacts with particles in the atmosphere (polarization) to navigate in a straight line. When no moonlight is available, the dung beetles tend to veer, curve or otherwise meander, making safe delivery of those poop packages much more difficult. 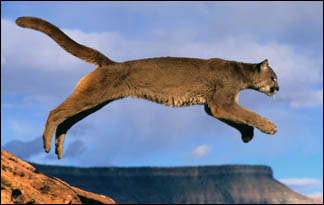 Possessing incredible strength and speed, the puma is one of the most formidable predators on the planet. But it's the puma's skill at jumping that gives it the No. 6 spot on our countdown. Also known as a mountain lion, cougar or panther, this animal has muscular hind legs and large paws designed for powerful leaping. From a standing position, the puma has been known to jump 15 feet vertically. With a running start, the animal can easily clear 40 feet horizontally. Pumas use this incredible skill to hunt, quietly sneaking up on prey until they are within pouncing distance and then delivering a swift and fatal bite to the neck. 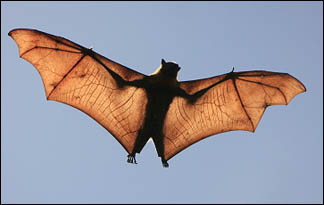 Bats have a lot of unique and interesting adaptations. For example, most bats spend the majority of their time upside down and some feed on the blood of other animals. They are also the only mammals that can fly. But perhaps the most impressive feature of bats is their ability to hunt using echolocation. With echolocation, bats send out high-frequency clicks as they fly. Then, they listen for the variations in the echoes that come back, which indicate the location of nearby insects. Using this system, they are able to feed on about 1,000 bugs per night, all caught on the wing. 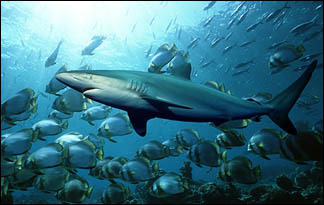 Sharks are among the most evolutionarily successful animals on the planet, due in large part to a variety of adaptations that give them a competitive edge in the wild. One of those adaptations is electroreception, which is a keen sensitivity to electrical impulses. Here's how it works: as fish swim around, their movement sends tiny electrical signals through the water. Sharks pick up on those signals as the water passes over a series of jelly-filled pores on their head. The pores, called ampullae de Lorenzini, are an extension of the lateral line system in sharks, which is a sensory organ that stretches down the sides of their bodies. Combined with the lateral line, electroreception allows sharks to snag prey with deadly accuracy, even in murky water. 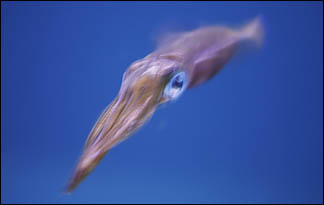 Cephalopods, a group of animals that includes squids and octopuses, are the fastest invertebrates in the sea, in part because of their unusual ability to use jet propulsion. When water flows into the animal's mantle cavity, it is held under pressure as long as its orifices are closed, except for an opening called the funnel. When the muscles of the mantle wall contract and squeeze the pressurized water back through the funnel, the animal is propelled through the water at a rate of up to 25 miles per hour. Cephalopods are also able to control the direction and speed of their movements, allowing them to move away from a threat or toward a prey animal as needed. 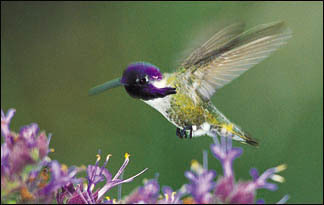 Not only are hummingbirds among the most beautiful birds on the planet, they are also the most impressive flyers. Within their wings the joint between the upper and lower arm is positioned very close to the body, giving them incredible leverage and flexibility in the air. They also beat their wings extremely fast - some species at 80 times per second, and do so in a figure eight pattern, which adds to their maneuverability. Hummingbirds are the only birds that can fly backwards and upside down. They are also the only bird with the ability to hover in the air, which is both captivating to look at and extremely advantageous for feeding on plant nectar. 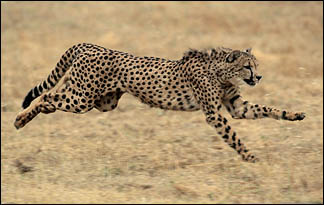 Reaching speeds of up to 68 miles per hour, the cheetah is the world's fastest terrestrial animal. With its long legs, small head and slender body, this animal is literally built for speed. When the cheetah runs, its backbone coils and uncoils with every stride, which helps to propel the animal forward during a chase. By some estimates, this feature may increase the cheetah's speed by up to 20 miles per hour. However, the cheetah's impressive speed comes at a high price: the animal is unable to run for longer than 10 to 20 seconds before it overheats. Because it makes its home in the savannah and other open areas where there is little opportunity to hide, the cheetah must rely on its speed to capture prey and time its kills precisely in order to bring down prey swiftly.