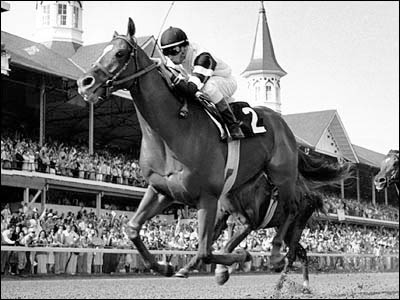 Affirmed was one of the most lucrative racehorses of his time, becoming the first thoroughbred in North America to bring in over two million dollars during the span of his career.

By far, his most defining moments occurred during 1978, when he netted the Triple Crown and also proved triumphant over Seattle Slew at the Marlboro Cup Invitational Handicap, marking the first time two Triple Crown winners faced off against each other.

Affirmed also had an intense rivalry with fellow racer, Alydar, which came to a head during the same year at the Travers Stakes in Saratoga, New York. With his usual rider Steve Cauthen out due to injury, Affirmed was helmed by replacement rider Laffit Pincay, who cut off Alydar, causing the horse to check and bringing about Affirmed's disqualification from his first place win.