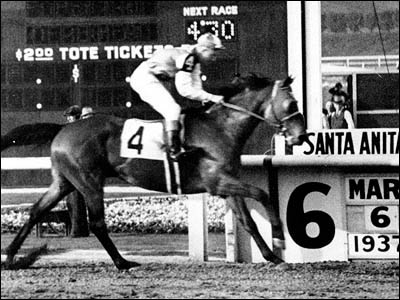 Though the grandson of Man O' War, Seabiscuit did not initially show a lot of promise as a racehorse, but all of that would change in 1936 under the guidance of new trainer Tom Smith and new jockey Red Pollard. The next year, the team won 11 of the 15 races entered, despite the fact that Pollard had lost an eye in a training incident.

Seabiscuit's popularity soared, raising spirits during the depression and building extreme momentum for a race against another legend, War Admiral in 1939 billed as the "Match of the Century" in which Seabiscuit proved victorious. He retired from the racing world in 1940, but his story later inspired several books and films, including the 2003 major motion picture "Seabiscuit," which was nominated for seven Academy Awards.