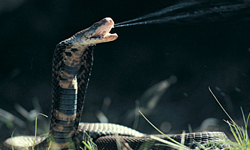 Not everyone has a Mozambique Spitting Cobra in his or her backyard, but it's likely that some other type of venomous animal lives there.
Digital Vision/Thinkstock

Venomous snakes, spiders and scorpions are often portrayed as villains of the animal kingdom. Their appearance can be sinister, their toxins deadly. But their threats to humans are often greatly exaggerated. Venomous snakes, for example, make up just 10 percent of snakes worldwide [source: University of Massachusetts Amherst].

So why do these animals terrify so many people? In the case of snakes, few creatures are more different from humans: no arms, no legs, no eyelids. That anatomy and those stares creep some people out. While Aztec and some African cultures revered snakes, Judeo-Christian beliefs that tie serpents to Satan in the Garden of Eden contribute to wariness about them.

Depending on where you live -- unless you live in a very cold climate -- chances are you may run into one of these animals in your backyard. Best advice: Leave them alone. Most people are bitten when they try to pick up or kill the animal. Also remember the last thing these creatures want to do is waste precious venom on something they can't eat. Venom takes a lot of energy to make, so unless their lives are in immediate danger, they would much rather hide or scurry away.

In this article, we'll find out more about 10 venomous creatures that may be in your backyard, and how to stay safely away from them.