by Marsha Walton
Prev NEXT
9 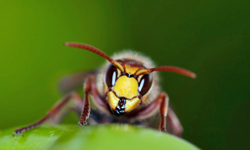 The yellow jacket may be small, but its venomous sting is still painful.
Hemera/Thinkstock

Plenty of picnickers have gotten a nasty surprise when they've taken a swig of a soft drink and gotten a painful sting on the lips, mouth or throat from an angry yellow jacket. These small wasps are attracted to sweet smells, and also to the odors of meat and fish. So, they hang around garbage cans as well as crash garden parties.

They're social insects, found in temperate areas across North America. Nests can be found in attics, walls, log piles, even in abandoned animal burrows, usually with 500 to 5,000 insects. And if the worker wasps perceive a threat, they'll attack intruders.

Only female yellow jackets have stingers, which are attached to their abdomen. While bees die after they've injected a victim, the stingers on wasps, hornets and yellow jackets remain on their bodies, so they can sting again and again.

While the natural reaction may be to swat and flail your arms as these insects fly toward you, that will likely get them more agitated. Just walk away.

The CDC estimates 90 to 100 people die each year from insect bites due to severe allergic reactions known as anaphylactic shock [source: CDC].

If you keep your distance, this insect is a plus for your immediate surroundings. They eat lots of flies and mosquitoes.