by Marsha Walton
Prev NEXT
5 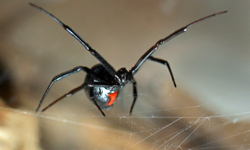 The black widow spider has a nasty reputation but keeps mostly to itself unless it's disturbed.
Hemera/Thinkstock

Legendary. Notorious. Always a scary element at Halloween parties. This spider is actually pretty timid, but its bite can be ferocious. A black widow's venom can cause cramps, difficulty breathing, nausea and even death.

Black widows are found in warm regions around the world. The female is black with a distinct, reddish, hourglass-shaped marking on her abdomen. More than 25 species worldwide eat insects and other spiders trapped in their webs.

One lifestyle change led to a dramatic decrease in black widow spider bites: indoor plumbing! Since the spiders no longer have outhouses to spin their webs in, people now encounter them doing yard work or near piles of firewood [source: Barnes].

Only the females bite, and do it only defensively, when touched or disturbed.

The most common myth about the black widow is that the female eats the male. It happens, but usually when the animals are in captivity and the male cannot escape. Females are typically twice the size of males.

When you see a web, don't get too close, and always assume a spider is on it. Once a web is built, these spiders tend to stay put. They are awkward and unsteady when they're forced to leave it.