by Marsha Walton
Prev NEXT
3 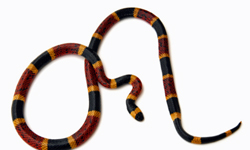 "Red to yellow will kill a fellow, red to black is a friend of Jack." What other venomous snake gets its own mnemonic rhyme?

Several harmless snakes are often mistaken for the colorful coral snake. This ditty helps humans remember which is the non-venomous king snake and which of the two can be dangerous.

Coral snakes are petite, usually just 20 to 30 inches (50.8 to 76.2 centimeters) long as adults. They can be backyard hazards because they like to hide in piles of leaves, loose earth or even bury themselves in the ground. Their bites can be serious, and victims should get medical attention quickly.

But sometimes their bites are hard to detect, because unlike the pit vipers, they have short teeth, not long fangs. Fortunately for any human targets, this venom delivery system is sometimes less efficient than that of pit vipers.

Coral snakes may have inherited some of their tough reputation because they're related to Old World cobras.

They're found across Florida, even into the Keys, and as far north as North Carolina, west into Texas and parts of Mexico. They like to live in scrub palms, often near swamps and wetlands. Be alert, because they can also climb trees.