by Marsha Walton
Prev NEXT
2 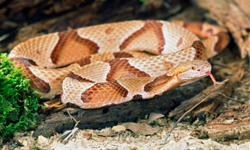 The copperhead adapts easily to living near humans, even in cities.
Design Pics/Valueline/Thinkstock

Copperheads can live just about anywhere, from forests and swamps to mountains and suburbs. They're medium-sized snakes, 2 to 4 feet (0.6 to 1.2 meters) long, and masters of disguise. Their copper-and-bronze color makes it easy for them to camouflage themselves in leaves, limbs or logs.

While their colors may differ, there is usually an hourglass-like banding pattern on their bodies. They're not aggressive, but an ill-fated step on them can lead to a strike.

Copperheads thrive from Mexico through most of the central United States and into New England. They're comfortable in forests and on rocky hillsides. And in what might be the most lethal roommate arrangement ever, copperheads sometimes live communally with timber rattlesnakes.

These snakes have adapted well to human developments, and are common in suburban, even city neighborhoods.

Like most snakes, there are plenty of tall tales about them. One myth claims that people can tell when copperheads are in their vicinity because they give off the scent of a cucumber. The reality is, many species of scared snakes release a musky odor from their vent, enabling possible predators to find them.