Browse the article 11 Animals that Use Camouflage 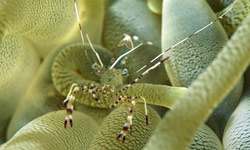 The animal kingdom is a wild, wacky place where animals have to be clever in order to survive. One of the most amazing techniques for survival is animal camouflage. Animals have the ability to mimic plants, ground cover, or even other animals in order to hide or hunt. The following is a list of some animals that are particularly gifted in the art of invisibility.

Contrary to popular belief, chameleons only change color when in imminent danger. Their everyday skin color, a light khaki, keeps them hidden from enemies during those not-so-dangerous times. Nearly half the world's chameleon species live in Madagascar, but they're also found in Africa, the Middle East, and southern Europe.

Whether their coats are spo­tted (useful for hiding in sun-dappled areas in the African outback) or black (perfect for nighttime stalking or lurking in shadows), these elegant and deadly cats are born with fashionable camouflage. Rabbits, young buffalo, and monkeys don't stand a chance when a hidden leopard makes a surprise attack.

Other bears and human poachers are the biggest threats to the majestic polar bear, but by blending into the blindingly white snow of the Arctic with equally white fur coats, some danger can be avoided. Only a polar bear's nose and foot pads are without fur.

If you're a fish, you better look twice before resting near that big rock . . . it could be an snapping turtle. There are hundreds of species of turtles and tortoises that use camouflage to blindside their prey and hide from large predators like alligators. Sadly, camouflage can't protect turtles from the poacher's fishnet.

Sure, chameleons are well-known to change color and blend into surroundings, but some of the animals who use camouflage on the next few pages may surprise you.

Ah, the Arctic tundra: cold, barren, and totally white. Arctic owls have a coat of snow-white feathers to keep them warm and safe from predators, such as foxes and wolves.

For most bugs, birds are the bad guys. For bark bugs, which hang out on trees around the world, this is especially true. In order to hide in the middle of nature's birdhouses, bark bugs appear to be part of the tree itself.

If you're ever swimming in the shallow waters off Australia or New Guinea, look for the ornate wobbegong -- though you probably won't be able to see it! This shark's body flattens out on the seafloor where its spots and blotchy lines resemble rock and coral. Wobbegongs take camouflage a step further with a little "beard" under their chins that looks like seaweed. Prey that swim in front of their mouths are gobbled up without knowing what hit them.

In order to hide from their prey, gaboon vipers -- among the most venomous snakes on Earth -- make the most of their brownish-gray, mottled scales. These big snakes hide in the layer of dead leaves that carpets the African rain forest floors. They also like to snuggle into forest floor peat and sneak up on unsuspecting prey.

Complete with fake leaf stalk, fake leaf veins, and perfect dead-leaf coloring, leaf butterflies have the whole camouflage thing down pat. Birds pass them by without a second glance since these insects from southeast Asia look more like dead leaves than butterflies.

Spiders, snakes, birds, and even other lizards all want a piece of the dragon lizard, so they have some of the most effective camouflage around. Not only do dragon lizards look nearly invisible when hanging out on a tree branch, they keep extraordinarily still, knowing that their predators react to the smallest movements. It doesn't make for an exciting life, but at least they live to tell about it.

Careful-- that flower you're thinking about smelling might have a flower mantis hiding inside. The flower mantis of western Africa uses colorful, pistil-and-stamen-like camouflage to trick smaller insects into smelling the roses, then snap -- lunch is served.