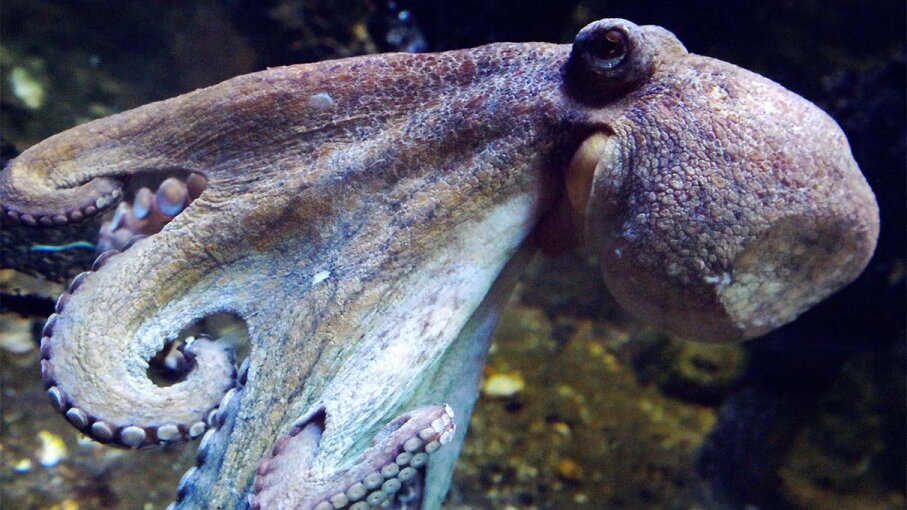 Blood is red, right? In most cases, yes. But, there are animals out there whose blood comes in different colors, such as the octopus, whose blood appears blue. LOIC VENANCE/Getty Images

Red elicits strong reactions. Around the world, it is by far the most commonly-used color in national flags. It can be a major confidence-booster: Researchers have found that wearing red garments makes people feel more attractive. On the flip side, according to one 2013 study, looking at red things might cause us to experience pain more intensely. You win some, you lose some.

Maybe red wouldn't provoke our brains so much if it didn't happen to be the color of human blood. In this regard, Homo sapiens is far from unique. From timber wolves to tiger sharks, most vertebrate animals have crimson blood in their veins. This hue is produced by hemoglobin, the protein that helps our blood distribute oxygen.

In grade school, you probably learned that blood contains three types of cells. White blood cells — or leukocytes — help us fight off viruses, harmful bacteria and other pathogens. Then we've got platelets, the damage control specialists that allow our blood to clot. Last, but not least, are the red blood cells. Their main purpose in life is to carry oxygen around, though they also bring carbon dioxide to the lungs where the gas can be exhaled.

Hemoglobin lets them execute both tasks. A core ingredient in red blood cells, it binds to oxygen and carbon dioxide. Hemoglobin is partly made up of iron atoms, which give this protein — and by extension, our red blood cells — a crimson appearance. Since platelets and white blood cells are vastly outnumbered by reds, human blood itself looks red.

But the vital liquid exists on a color spectrum. Natural selection has engineered blue-blooded invertebrates, green-blooded reptiles and fish with transparent fluids in their veins. We'll get to meet some of those curious critters today. 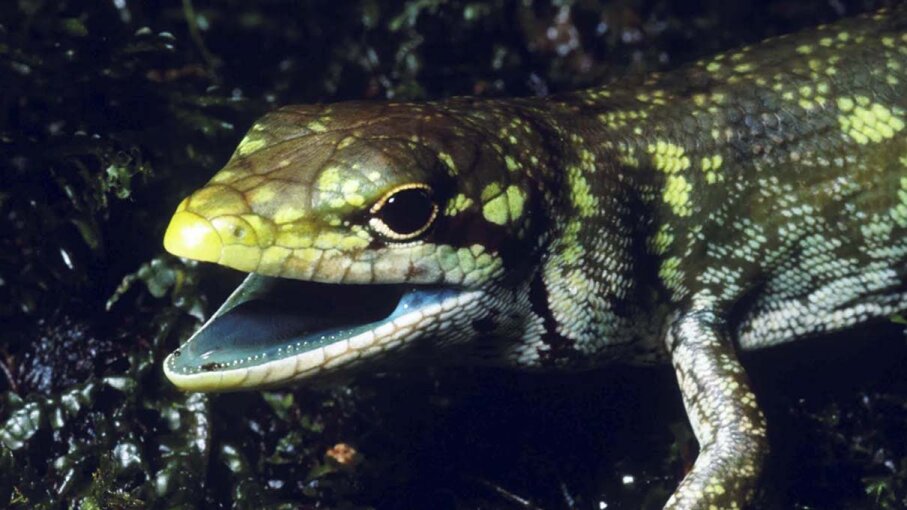 The green blood of this prehensile-tailed skink from New Guinea is caused by high concentrations of the green bile pigment biliverdin. Christopher C. Austin/LSU

Herpetologists don't know why a group of small tropical reptiles need green blood, but the search for an answer just took an unexpected turn.

New Guinea is home to multiple lizard species from the skink family with lime green blood. (Consequently, their tongues, muscles and bones are all various shades of green.)

Like humans, the reptiles have hemoglobin-rich red blood cells. Such cells do not last forever, and when they break down (in our bodies as well as the lizards'), the green-pigmented waste product biliverdin is made. Most vertebrates filter this stuff out of their circulatory systems. For them, excess biliverdin can harm cells, neurons and DNA.

Yet the lizards have a level of biliverdin in their veins that would kill a human. Moreover, the pigment is so densely-concentrated that it overrides the hemoglobin and makes their blood look green.

On May 16, 2018, a paper on the subject was published in the journal Science Advances. Its authors carried out a genetic survey of 51 different skinks in Australia, Asia and the islands between them. Six of the green-blooded New Guinea species were analyzed in the process. Turns out those biliverdin-loaded reptiles are not closely related to one other. In theory, they evolved green-bloodedness independently — and each of them is descended from red-blooded ancestors.

Such an unusual trait would not have evolved six times over if it didn't offer some kind of benefit. But scientists have yet to identify the advantage of having green blood. Predators who eat the lizards don't get sick afterward, and the skinks are no better camouflaged than their biliverdin-deficient cousins. It's possible that the special blood helped their ancestors kill parasites, but more research will be needed to confirm or refute this. 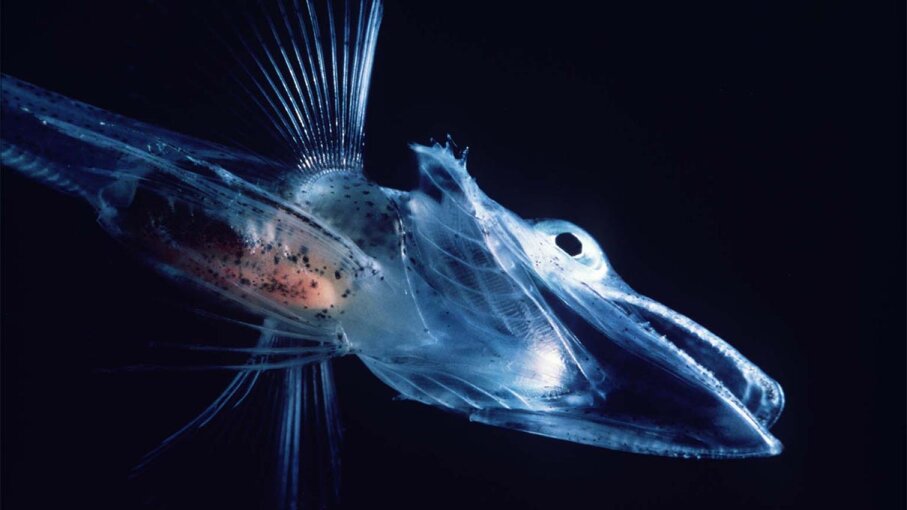 Unlike every other known type of backboned animal, the crocodile icefish doesn't have any red blood cells — or hemoglobin — at all. Wikimedia

Named for their long, toothy snouts, crocodile icefish (of which 16 species have been recognized) live in the ocean waters around Antarctica. The extremophiles are built to thrive in conditions that would kill most other vertebrates. Crocodile icefish frequent brutally cold portions of the sea where the water temperature can plummet all the way down to 28.5 degrees Fahrenheit (1.9 degrees Celsius). That's below the point at which fresh water freezes.

In extraordinarily cold water, red blood cells turn into a liability. Blood with a high percentage of these cells becomes dangerously thick and hard to circulate when the outside temperature gets too low. That's why fish who live in cold waters have proportionately fewer red blood cells than their warm water counterparts do.

Crocodile icefish take this to the extreme. Unlike every other known type of backboned animal, they don't have any red blood cells — or hemoglobin — at all. It's astonishing!

Now you might be thinking "Wait a second. Without hemoglobin or red blood cells, how do the fish circulate oxygen through their bodies?" To get the job done, they enlist the ocean itself. Cold water is naturally richer in usable oxygen than warm water. Crocodile icefish absorb some of this oxygen directly from the ocean and send it into their blood streams. The blood itself is a colorless liquid, a fact that really surprised the discoverer of these fish, biologist Ditlef Rustad, when he dissected one in 1928. So abundant is the cold water oxygen that, upon absorption, it doesn't need to hitch a ride on red blood cells to get around. Instead, it can travel from point A to point B inside the fish's hemoglobin-free plasma. 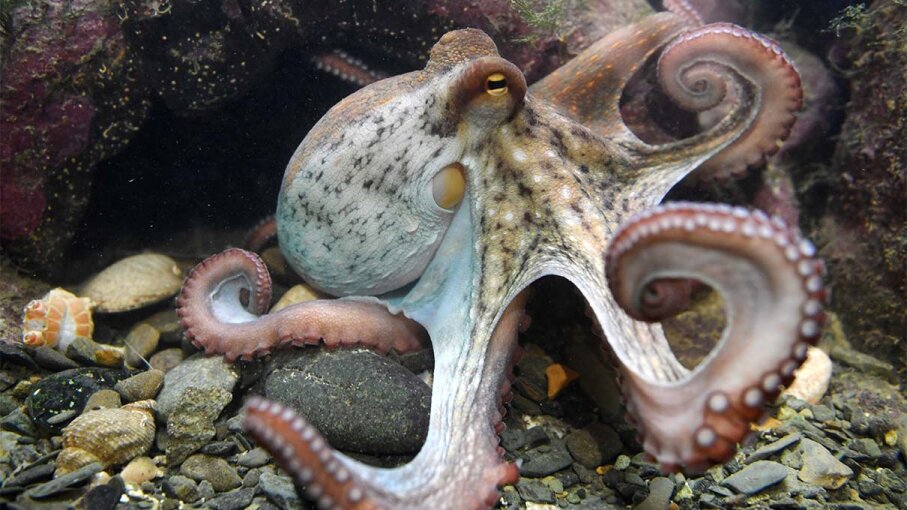 Octopuses are invertebrates whose blood appears blue because it is composed of hemocyanin, a protein containing copper, instead of hemoglobin, which contains iron. FRED TANNEAU/Getty Images

Hemoglobin is a key ingredient in the circulatory systems of nearly all vertebrate animals. Yet many spineless creatures use an alternative protein: Hemocyanin.

Both are capable of binding to and transporting oxygen. But whereas hemoglobin contains iron atoms, hemocyanin incorporates copper. As a result, blood containing the latter protein looks markedly different from our human blood. When hemocyanin-rich blood becomes oxygenated, the copper turns it blue.

The list of invertebrates that rely on hemocyanin instead of hemoglobin is a long one. Crustaceans utilize the protein in their bloodstreams, as do spiders and scorpions. The roster also includes certain mollusks like everyone's favorite multi-armed brainiacs, the octopuses. Yes friends, octopuses — or if you prefer, "octopi" — have bluish blood. To make things even stranger, they've got three hearts with which to pump this liquid.

In oxygen-poor deep-sea environments, hemocyanin is better than hemoglobin at carrying precious oxygen through an animal's veins. Octopuses use the copper-laden protein to stay alive in some deep, cold and thoroughly anoxic waters. Additionally, hemocyanin helps the tentacled critters regulate the salt content of their blood so it matches that of the water they're swimming in.

The setup is not without its drawbacks. Octopuses have a hard time adapting to fluctuations in water acidity. Scientists use the pH scale to determine how basic or acidic a given water sample is. Research has shown that even a small change in the local pH level can weaken the ability of hemocyanin to bind with oxygen in octopus bloodstreams. The consequences may be fatal. 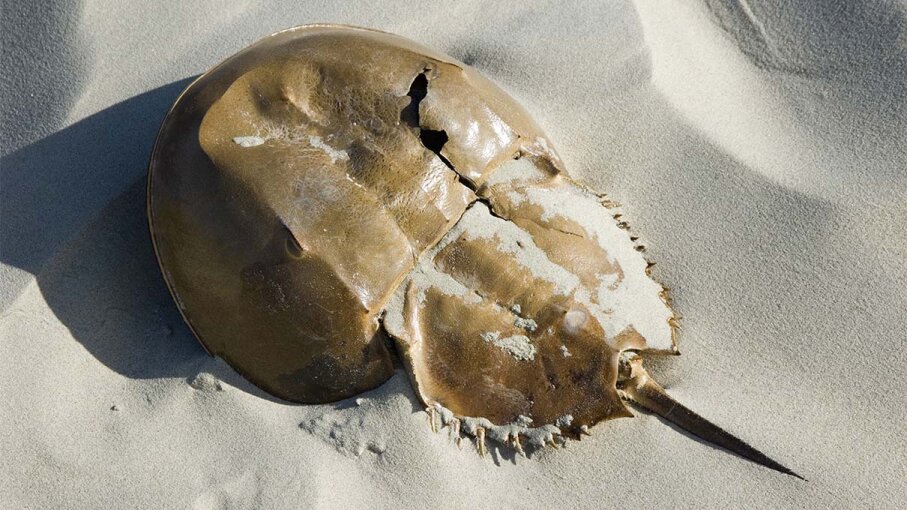 Horseshoe crabs don't have white blood cells, but instead have amoebocytes, which help them fight off disease-carrying microorganisms. Digital Light Source/Getty Images

Mankind owes a great debt to the world's horseshoe crabs. Quite unwittingly, these marine invertebrates have become our allies in the endless fight against medical maladies. And it's all thanks to their wonderful blood. Despite the misleading common name, horseshoe crabs are not true crabs. They're more closely akin to spiders — and just like those arachnids, horseshoe crabs have blue blood filled with hemocyanin.

But there's something else in their blood, too. You see, horseshoe crabs don't have white blood cells, which should make them vulnerable to the many types of harmful bacteria and viruses roaming the ocean. Not to worry: Evolution's given the hard-shelled creatures a different way to fight off disease-carrying microorganisms.

Horseshoe crabs have moving cells inside their blood called amoebocytes. When one of these finds a bacterium, it secretes a rapidly-coagulating gel that encases the intruder. Known to scientists as coagulogen, the substance keeps unwanted bacteria from spreading.

To the medical community, it's a godsend. All experimental intravenous drugs are now required by U.S. law to pass a contamination test involving horseshoe crab blood. In it, a sample of the medicine is mingled with the invertebrate's azure blood. If any coagulogen clots appear within 45 minutes, then the researchers will know the drug contains (possibly harmful) bacteria. As such, it isn't ready to be used on human patients. To meet demand, some laboratories harvest these crabs and extract blood samples. Those who survive the ordeal are released back into the ocean. 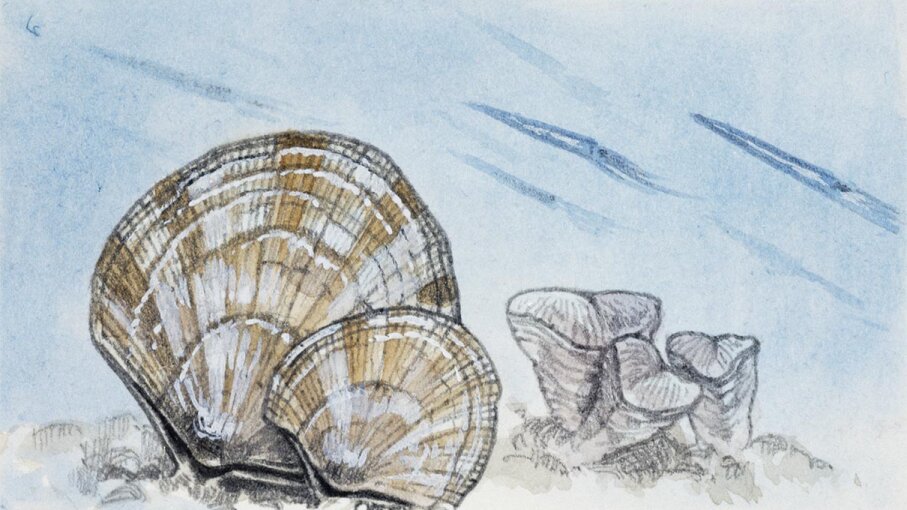 Brachiopods do not rely on hemoglobin or hemocyanin to carry oxygen in their blood, but the protein hemerythrin moves oxygen and makes their blood a violet-to-pinkish color. De Agostini/Getty Images

Fossil enthusiasts know all about these guys. Brachiopods are ocean-dwelling animals that superficially resemble clams. They've got two articulated shells — or "valves" — apiece: One rests underneath the animal while the other covers it from above. Found in an assortment of marine habitats, the creatures filter tiny food particles out of the water. Although there are over 300 living species, most people associate brachiopods with prehistoric times because the hard-shelled creatures are disproportionately well-represented in much of the fossil record.

Extant brachiopods do not rely on hemoglobin or hemocyanin to ferry oxygen in the blood. That task is left to hemerythrin, yet another pigmented protein. Like hemoglobin, it contains iron atoms, albeit in a different arrangement. Hemerythrin makes deoxygenated blood look either colorless or faintly yellow. However, once the blood starts taking on oxygen, it adopts a violet-to-pinkish hue.

You'll also see this kind of blood in Sipuncula marine worms. Nicknamed "peanut worms" due to their segmented appearance, the creepy crawlies reside in sand, mud, crevices and unoccupied shells among other places.

Other ocean-going worms have a different circulatory setup. If a diver were to spot a live polychaete cruising through the waves, he or she might mistake it for a sentient feather-duster. Most of these worms are covered in bristles and tentacles whose function varies from species to species. Some have red blood, but others harbor green blood. The latter use the oxygen-binding protein chlorochurion in place of hemoglobin. When concentrated, the stuff appears to be green. Those New Guinea skinks have apparently got some company...