See what it took to clean up the effects fo the Gulf Oil spill. 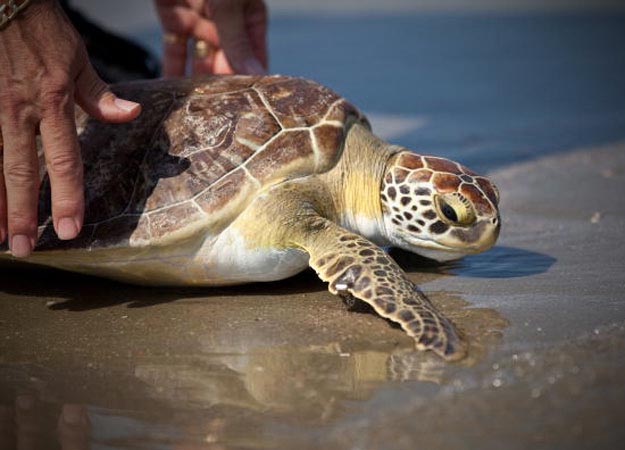 A rehabilitated green turtle is released back to the ocean by the Turtle Rescue Team of the South Carolina Aquarium May 1, 2010 at Isle of Palms. Sea turtles are endangered throughout the southeast and hundreds are expected to be injured in the massive oil spill along the Gulf coast. (Photo by Richard Ellis/Getty Images) 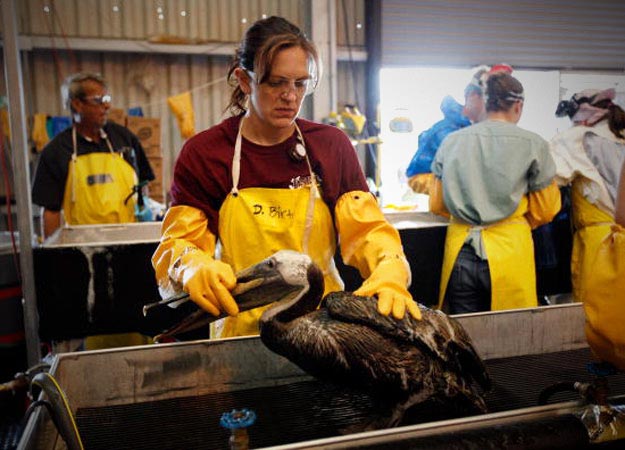 Conservationist Danese Birtell cleans an oil-covered brown pelican at the Fort Jackson Wildlife Rehabilitation Center on May 15, 2010 in Buras, Louisiana. The bird was rescued from Grand Isle two days before and brought to the center for rehabilitation. U.S. Secretary of the Interior Ken Salazar toured the center Saturday and watched the bird cleaning. On July 15, 2010, BP announced that they had stopped the leak. (Photo by John Moore/Getty Images) 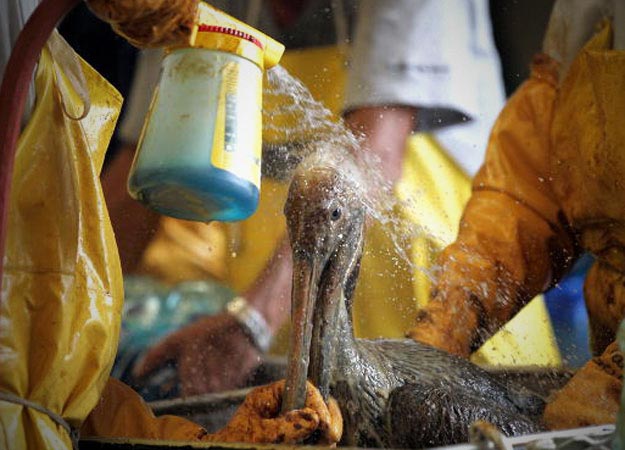 Pelicans are cleaned of oil at the Fort Jackson Oiled Wildlife Rehabilitation Center June 23, 2010 in Buras, Louisiana. The Deepwater Horizon drilling rig exploded on April 20 leaking millions of gallons of oil into the Gulf of Mexico. (Photo by Chris Graythen/Getty Images) 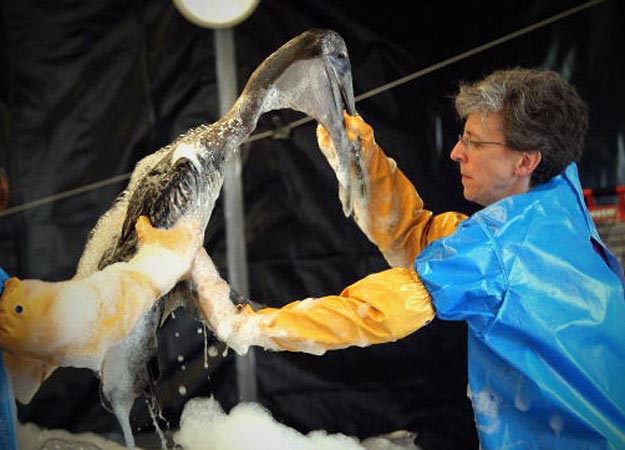 A pelican covered in oil is cleaned at the Fort Jackson Oiled Wildlife Rehabilitation Center on June 11, 2010 in Buras, Louisiana. It is thought that thousands of birds and other wildlife have been contaminated due to the oil spill. U.S. government scientists today estimated that the flow rate of oil gushing out of a ruptured Gulf of Mexico oil well is between 40,000 and 60,000 per day. (Photo by Spencer Platt/Getty Images) 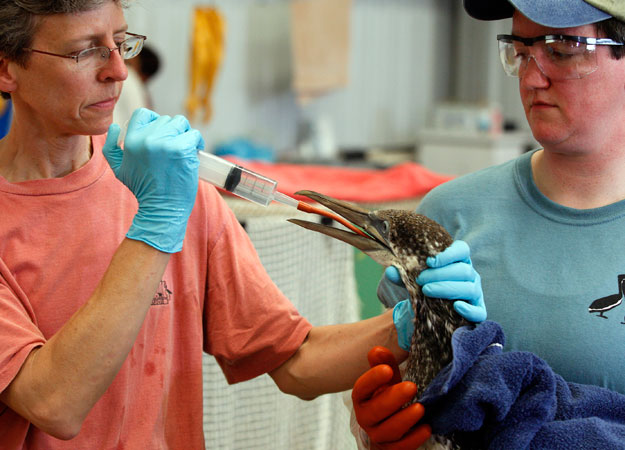 Dr. Rebecca Dunne, left, with Tri-State Bird Rescue and Research, and Heather Nevill, with the International Bird Research Center, hydrate a northern gannet bird, which is covered in oil from a massive spill in the Gulf of Mexico, in Fort Jackson, Lousiana, Saturday, May 1, 2010. (AP Photo/Patrick Semansky) 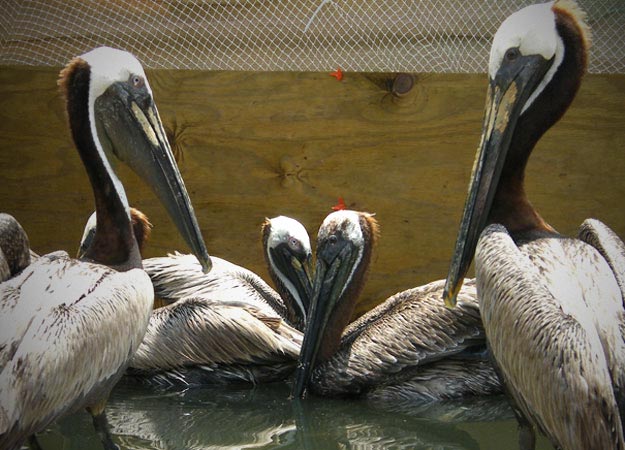 Recuperating in an outdoor pen until they are ready for release, pelicans swim while others perch on the rim of their pool on Friday, June 11, 2010. With more than 400 oiled pelicans rescued off of Louisiana in the past eight days, staffers at the oiled bird rescue center near Fort Jackson in Louisiana have had to make several new recovery pens, and more are planned. The pens now hold 20 to 30 birds, but pelicans are gregarious and often found in large, close groups. (AP Photo/Janet McConnaughey) 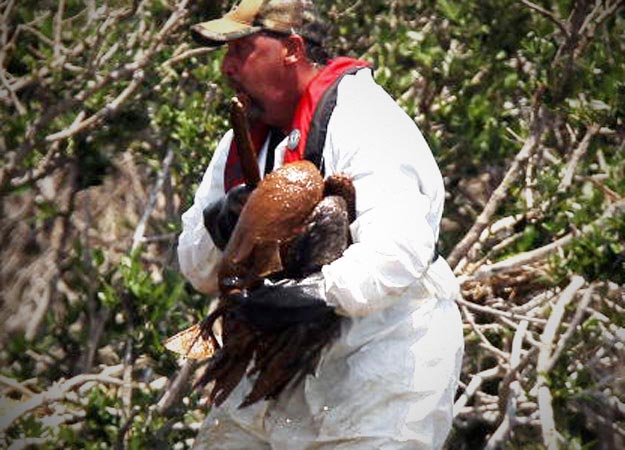 A bird rescue team captures an oiled pelican for cleaning on Cat Island in Barataria Bay June 6, 2010 near Grand Isle, Louisiana. BP has stopped the leak by placing a 75-ton containment cap on July 15, 2010. (Photo by Win McNamee/Getty Images) 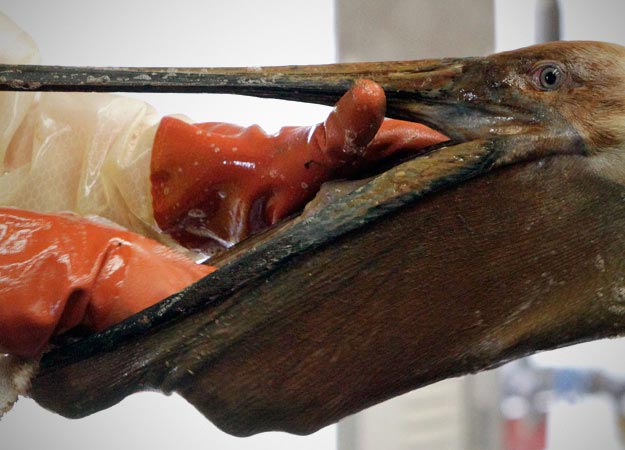 Workers clean a brown pelican covered in oil at a rescue center at a facility set up by the International Bird Rescue Research Center in Buras, Louisiana, Saturday, June 5, 2010. The birds are covered in oil from from the Deepwater Horizon accident and are cleaned and then released. (AP Photo/Bill Haber) 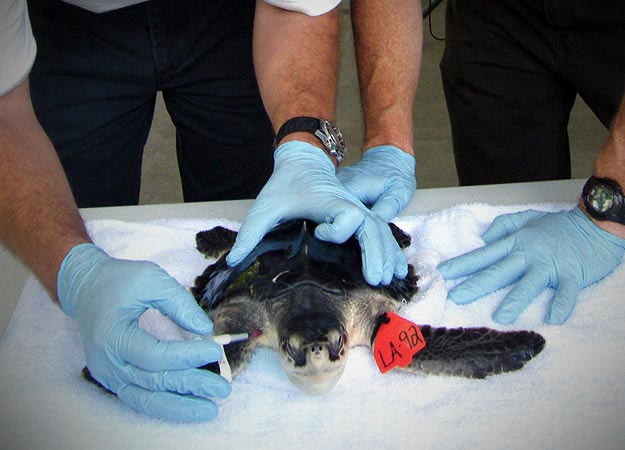 Audubon Nature Institute veterinarian Robert MacLean, left, and Michael Ziccardi, a veterinarian at the University of California at Davis and head of the oil spill sea turtle and marine mammal response, give antibiotics to a Kemp's ridley sea turtle on Thursday, June 10, 2010 at Audubon Aquatic Center on New Orleans' west bank. The turtle is among more than two dozen brought in covered with oil, but that has all been cleaned off the shell and flippers are naturally black. (AP Photo/Janet McConnaughey) 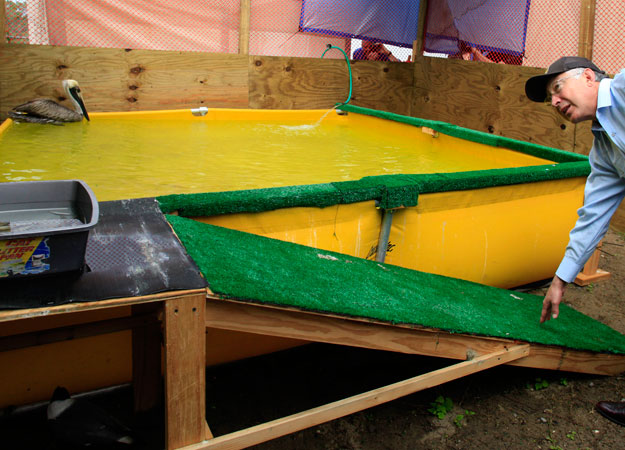 12 Regal Facts About Siamese Cats
It's a Bird! It's a Spider! It's Pelican Spider!
10 Dogs Who Made History