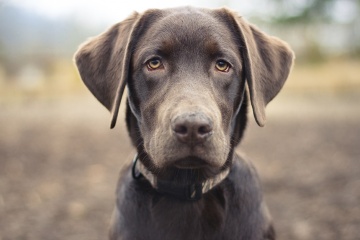 In many ways, dogs are human's best friend, but they may not be able to help you choose your next wallpaper color.
Angela Jacquin Photography/Thinkstock

Humans have three different types of cones in their eyes and each type of cone is designed to distinguish a specific wavelength of light. Combined, these three types of cones allow the average human to distinguish a staggering one million colors or more. Dogs and other mammals are dichromats, which means they have only two types of cones. This doesn't mean that they see the world in black and white, only that they can distinguish fewer colors than the average human. Don't feel too sorry for your canine companion, however; even with just two types of cones, he can see somewhere around 10,000 different shades [source:Greenwood].

Doggie vision is very similar to that of humans with red-green colorblindness [source:UCSB ScienceLine]. Like humans with this condition, dogs can easily interpret colors with shorter wavelengths, but may have trouble with longer wavelengths. They see a rich spectrum of colors, but may mix up shades of red and green, or those with any red or green components, like purple or blue-green. Since they are unable to distinguish the color red, they simply interpret it as dark brown. All yellow, green or orange objects appear in various shades of yellow or yellow-brown. Purple, which consists of red and blue, looks like pure blue to dogs because they can't interpret the red component. The blue-green hue of oceans and other water bodies likely appears to your dog in various shades of grey [source:Palmero].

To keep things simple, consider the acronym ROYGBIV, which is commonly used to help students remember the colors of the rainbow. While the average human can see the full spectrum of color from red to violet, a rainbow appears slightly different to dogs. Instead of gradually transitioning from red to orange, yellow, green, blue, indigo and violet, a dog's visible spectrum starts with a deep brown, transitioning into lighter brown, yellow, grey, light blue then dark blue.

Keep your canine's color capabilities in mind next time you're shopping for the perfect toy for your best friend. Skip the bright red, which appear as muddy brown to your pooch, and stick to colors like blue or yellow that your dog can truly appreciate.