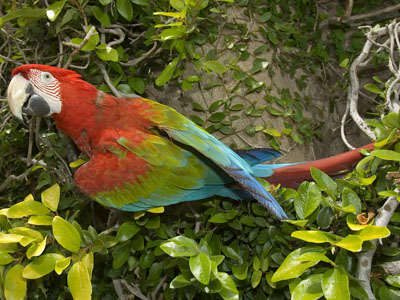 Family planner: Similar to the cockatoo, the galah (Australia) raises a larger or smaller clutch of chicks, depending on food availability. ZSSD/Getty Images Detox dieter: The stunning scarlet macaw (South America) eats clay from riverside deposits, which may help it process toxic seeds it consumes.

Sponge dad: A male sand grouse (Asian and African deserts) soaks himself in water, then flies back to the nest so his chicks can drink from his feathers.

Mach 0.13 in level flight: The spine-tailed swift (Asia) can fly 106 miles per hour--without benefit of a dive.

Captain Ahab: The wetlands-dwelling anhinga spears fish with a long, sharp, slightly barbed beak that keeps dinner from sliding off.

Lazy mom: A paradise whydah hen (equatorial and southern Africa) lays her eggs in a finch nest. This fools the finch, which raises the chicks as its own.

Fears nothing: The two-and-a-half-foot-tall great gray owl (northern forests) has a wingspan of five feet and fiercely attacks anything that gets too close to its nest and owlets.

Preventive measures: The southern carmine bee-eater (Africa) rubs a bee's "butt" against a tree branch to break off its stinger.

Bone-breaker: European and Asian mountains are home to the lammergeier, a high-flying vulture that drops bones repeatedly to get at the tasty marrow.

Sturdy swimmer: American dipper birds, also known as "water duzels," use their strong wings to "fly" under and through water to catch prey.