Browse the article Can Snakes Really Come Up a Toilet Pipe? 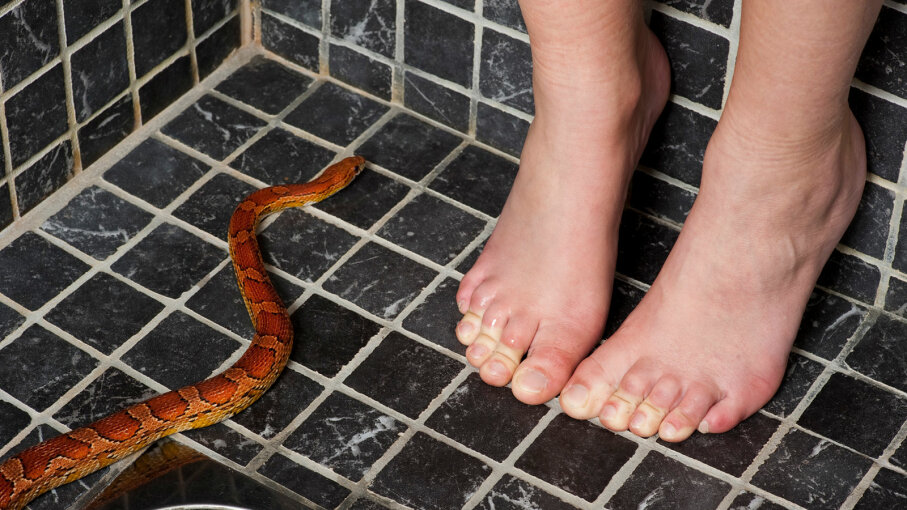 Some people love snakes, but no doubt anyone would be frightened by finding an unwelcome one in their toilet, or slithering over to the shower drain. Rhoberazzi/Getty Images

Snakes are often high on the list of things adults are most afraid of. So, imagine the reaction to a snake slithering its way up out of your toilet, particularly when you're about to sit down.

If even the thought of toilet snakes sends chills down your spine, take heart; while it's certainly possible for a snake to end up in your toilet, it's extraordinarily unlikely. The very reason that these stories make headlines is that they are so very rare, and so shiver-inducing [source: Wickman].

In 2010, newspapers devoted column space to the story of a 3-foot (0.9-meter) corn snake found in a 19th-floor toilet in New York City. In an interview with the Wall Street Journal, herpetologist – that's a snake expert – Jack Conrad agreed that it was "within the realm of possibility" that the snake made its way up through the pipes. He cited the fact that snakes are good swimmers who can hold their breath for a long time, and are well capable of swimming upward and squeezing through tight spaces if needed [source: El-Ghobashy]. Comforting, right?

Fortunately, there's no guarantee that this snake traveled through the pipes at all. It may have gotten in some other way and simply curled up in the toilet to relax. In 2018, a North Carolina man found a snake in his toilet that he believed came out of a tree and into a ventilation pipe on the roof of his home [source: Inside Edition]. Not exactly a soothing thought, but better than imagining a snake entering through the pipes every time nature calls.

Many of the snakes found in toilets are simply not native to the areas where they were found. It's much more likely that they escaped or were liberated by owners who no longer wanted them then that a nest of nonnative snakes is setting up home in a sewer pipe [source: Vettel].

But what would it take for a snake to enter your home through the toilet? First, it'd have to get in to the sewer pipe, which almost surely means you have a close neighbor who doesn't keep a close eye on his scaly pet, sharing a sewer line with you. Then it'd have to choose to enter the toilet and head for the sewer line. Instead of proceeding straight out of the line and into the sewer main, he's have to randomly choose your sewer pipe to enter by crawling upward, where his journey would end inside your toilet.

If the snake were to skip your sewer pipe and continue into the sewer main, he'd likely die of exposure [source: Vettel]. Thanks to relatively low temperatures below the ground where these pipes are located, most snakes would be unable to survive for long periods, making it extremely unlikely that they could set up homes in the sewers as some alligators have managed to do.

Thought of toilet snakes giving you the heebie-jeebies? Invest in a multi-flap, which fits over your toilet pipe and allows water and waste to exit while keeping critters of all shapes and sizes from entering your space.