How Do Animals Survive Major Storms?

Browse the article How Do Animals Survive Major Storms? 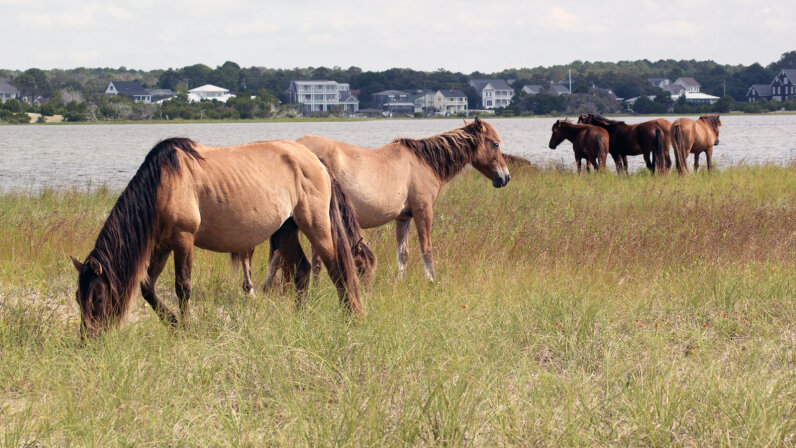 The full impact of September 2018's Hurricane Florence is still being measured. Its verified death toll continues to rise: Forty-eight people across three states are now known to have died in the storm or its aftermath. Sadly, the fatalities left in Florence's wake were not restricted to humans. In North Carolina (an important livestock hub), flooding has killed roughly 3.4 million domestic fowls and 5,500 captive hogs.

Yet local animal fanciers did receive a spot of good news as well. For almost five centuries, herds of feral horses have lived on the Tarheel State's barrier islands. Thought to be descended from mustangs brought over by Spanish explorers, these Outer Banks equines are beloved by the community and enjoy government protections.

It turns out they're also quite storm-savvy. Censuses taken after Hurricane Florence showed that while some individuals remain unaccounted for, a large majority of the beach-loving horses weathered the storm. Why did the barrier island horses survive Florence when so many farm critters perished? And how do other animal species normally react to hurricanes? Read on to find out.

More than 100 of North Carolina's free-roaming beach horses live on Cape Lookout National Seashore, a preserve encompassing three different barrier islands. Florence was by no means their first rodeo when it comes to major hurricanes. As park biologist Sue Stuska reminded the Associated Press, the horses have been riding out tempests for hundreds of years. Well-attuned to changes in the weather, they instinctively seek out high ground during floods and take refuge in thickly-vegetated areas once the winds get violent.

Unfortunately, many animal populations cannot make the same claim. Hurricanes — and the floods they produce — are notoriously hard on coast-hugging shrimp, crabs and oysters. The invertebrates have evolved to live in waters with specific salinity levels. When runoff from hurricane-generated floods pours into bays and estuaries, the percentage of salt in the water goes down. That decrease often ends up killing scores of oysters, shrimp and other sea-dwelling organisms. Texas fishermen witnessed this problem firsthand after Hurricane Harvey did a number on delicate Gulf Coast ecosystems.

There are, however, marine creatures who proactively steer clear of hurricanes. Sharks can pick up on pressure changes in the water column — and detect waterborne vibrations — using a network of canals and pores embedded in their skin. The same system alerts them to oncoming storms. Barometric air pressure drops shortly before a hurricane or tropical storm hits. Upon sensing this, young blacktip sharks who normally live in shallow bays flee into the relative safety of deep offshore waters and then come back after the tempest passes.

Going deep is a fine tactic for sharks, but it's not an option for swimming mammals (like dolphins) who must surface to breathe. It's also less-than-ideal for the inhabitants of lakes, swamps and river systems. Alligators often drown or get killed by flying debris during storm surges. To stay safe, they may clamber onto driveways and backyard porches that manage to remain above the water level — much to the chagrin of some homeowners.

Blowing in the Wind

Above the heads of gators and other ground-dwelling creatures, arboreal squirrels face their own set of problems. High-speed hurricane winds are liable to strip trees of their nuts, imperiling the mammals' food supply. Furthermore, powerful storms blow baby squirrels out of their parents' tree-based nests. Hurricane Irene saddled wildlife rehabilitation groups with hundreds of orphaned newborn squirrels who'd been evicted from their nests and would've most likely perished if left to fend for themselves.

And speaking of trees, when Hurricane Hugo leveled South Carolina forests in 1989, the natural disaster almost wiped out the world's largest population of endangered red cockaded woodpeckers, a species dependent on living pines.

Birds respond to hurricanes in lots of different ways. The white-throated sparrow, for instance, keeps tabs on barometric pressure and will postpone its fall or spring migration to avoid oncoming storms if necessary. Many avian species take on the exhausting challenge of flying into the eye of a hurricane and then keeping pace with it as the tempest gradually dies down. Understandably, some birds who attempt this get overcome by fatigue and die before the storm subsides.

Living in captivity doesn't necessarily safeguard beasts against the ravages of natural disasters. Despite the valiant efforts of farmers across North Carolina, the state lost millions of livestock animals to Hurricane Florence. Blocked roads, flooded barns, power failures and broken dams contributed to this depressing glut of dead turkeys, chickens and hogs — whose corpses present significant health risks to the human population.

If there's a silver lining to be found here, it's the fact that certain animals have turned storms like Hurricane Florence into opportunities. Consider the eastern spadefoot toad. This secretive amphibian likes to breed in temporary ponds, where fish and other aquatic predators cannot easily catch it. Such short-lived bodies of water become common after heavy rains. For that very reason, the toads reproduce like crazy in the wake of a hurricane. At a time when amphibian populations are declining all over the world, that's an encouraging thing to see.

NOW THAT'S INTERESTING.
Hurricanes may be forcing reptiles to get a grip. Literally. Anoles are a group of New World lizards who climb walls with adhesive toe pads. A 2018 study argued that one species might be evolving shorter hind legs and longer toe pads. The reason? Said body plan could make it easier for the lizards to cling onto tree limbs while hurricane-force winds are blowing.