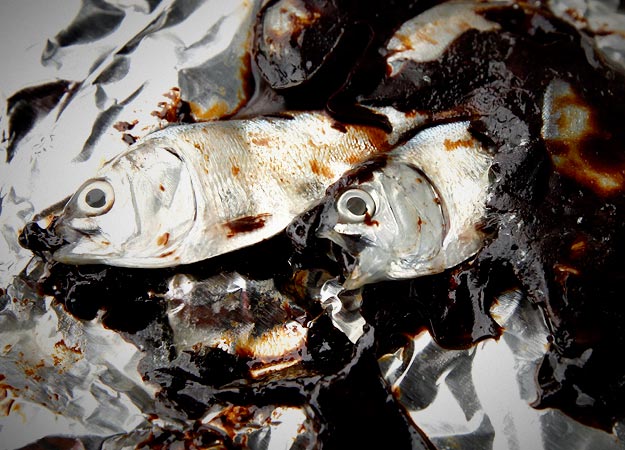 Dead fish in a clump of oil, which were part of a larger fish kill and placed in foil by Louisiana Wildlife and Fisheries personnel, are seen in oil impacted areas of the Northern shores of Barataria Bay in Plaquemines Parish, Louisiana, Tuesday, June 15, 2010. (AP Photo/Gerald Herbert) 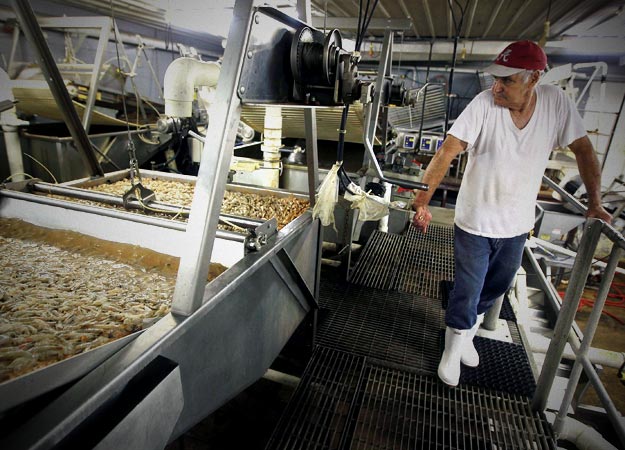 Billy Nelson keeps an eye on the peeling machine as shrimp imported from Mexico are prepared at the Deep Sea Foods processing center on June 9, 2010 in Bayou La Batre, Alabama. Billy has worked at the business for 31 years and is afraid he may lose his job if the company has to lay people off. The owner of Deep Sea Foods, Charles Kraver, said he has not been able to get local shrimp since the waters were closed due to the Deepwater Horizon oil spill in the Gulf of Mexico. He has had to have shrimp raised in Mexico trucked to keep customers. Residents of the town, which is known as the Seafood Capitol of Alabama, fear what will become of it if the oil continues to pour out of the Deepwater Horizon, since the town's fisherman have been forced to stop working. Commerce in town is intertwined with the fishing industry and if it collapses the effect will be devastating. (Photo by Joe Raedle/Getty Images) 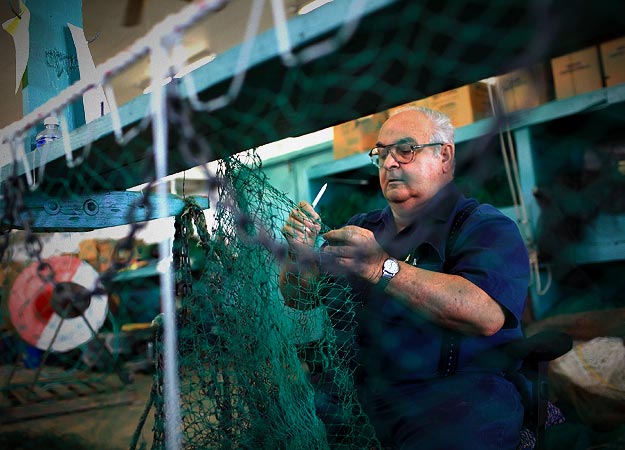 Lawrence "Chine" Terrebonne makes fishing net in Chine's Cajun Net Shop on June 16, 2010 in Galliano, Louisiana. Due to the bans on fishing in many areas of the Gulf, Terrebonne, who has been making nets for 61 years, has experienced a drop-off in orders for new nets. Following a meeting with President Obama, BP announced that they will finance a $20 billion fund to compensate individuals whose jobs and incomes have been affected by the BP oil spill in the Gulf of Mexico. BP also announced that they would forgo paying out their annual dividends to shareholders in order to finance the Gulf oil spill. The BP spill has been called the largest environmental disaster in American history. (Photo by Spencer Platt/Getty Images) 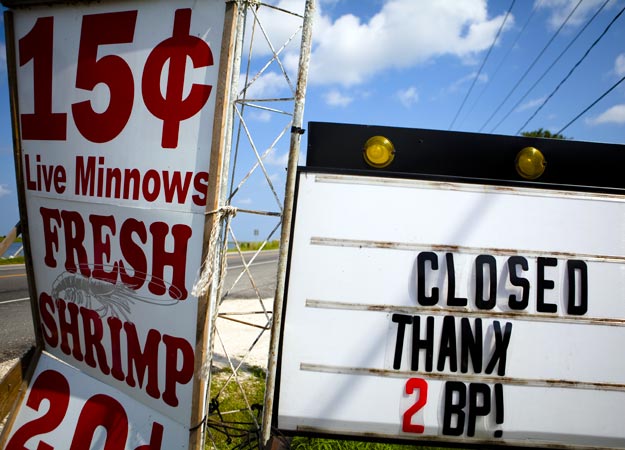 Local communities express their frustration with the oil spill's impact on their fishing industry in the area near the Deepwater Horizon disaster and the British Petroleum oil spill off the Gulf Coast on June 14, 2010 on Grand Isle, Louisiana. (Photo by Jeff Hutchens/Getty Images) 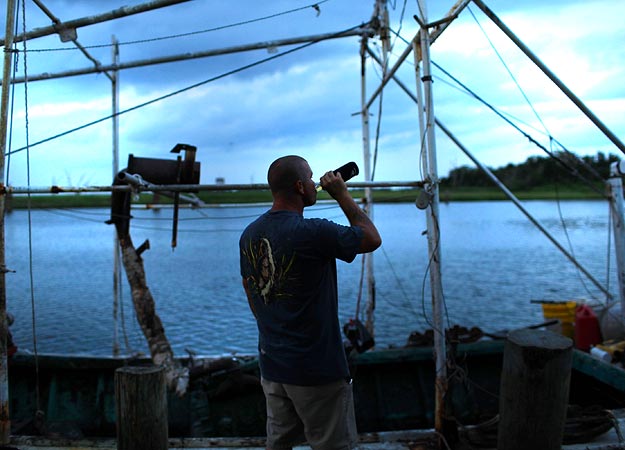 Out of work shrimper Nolan Guidry stands beside his boat while waiting to be granted permission to go shrimping again due to the ban on fishing in much of the Gulf of Mexico after the BP oil spill June 13, 2010 in Golden Meadow, Louisiana. Guidry, who must now subsist off of meager checks from BP, has been shrimping his entire life and comes from generations of shrimpers. The spill has been called the largest environmental disaster in American history. (Photo by Spencer Platt/Getty Images) 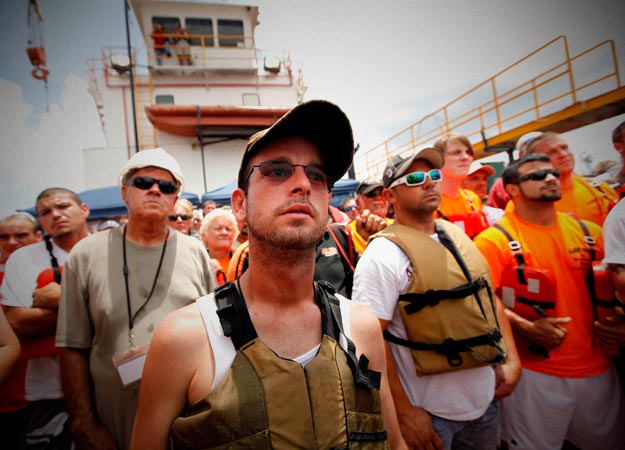 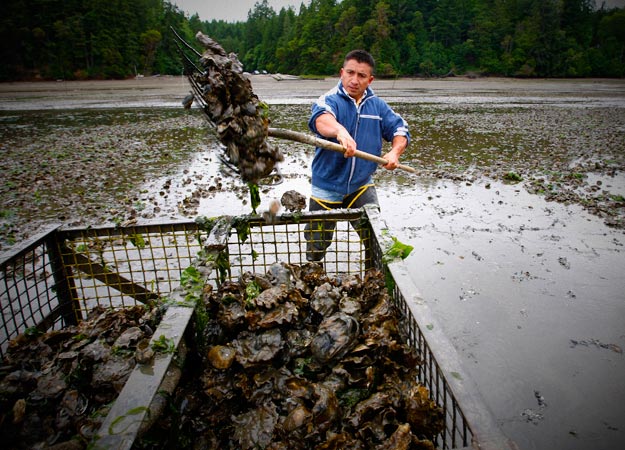 Efrain Rivera uses a pitchfork to harvest Pacific oysters at low tide, Monday, June 21, 2010, at a farm owned by Taylor Shellfish Co. in Oyster Bay near Olympia, Washington. The oil spill in the Gulf of Mexico has left a huge void in the oyster market that can't easily be filled by Pacific and other regional varieties of oysters, which have a two- to four-year growing cycle. (AP Photo/Ted S. Warren) 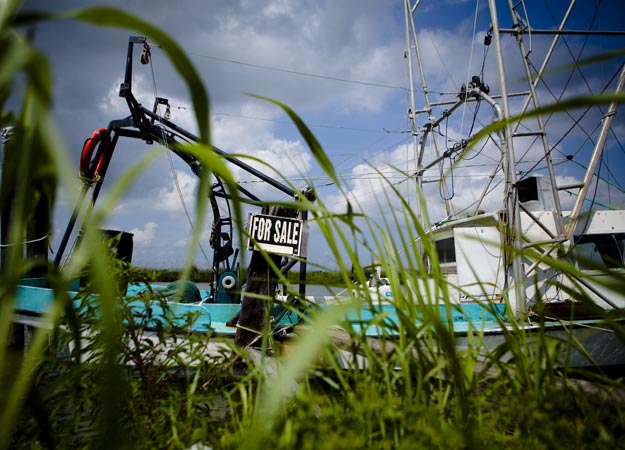 A fishing boat sits for sale near the areas affected by the Deepwater Horizon disaster and the British Petroleum oil spill off the Gulf Coast on June 11, 2010 on Grand Isle, Louisiana. (Photo by Jeff Hutchens/Getty Images) 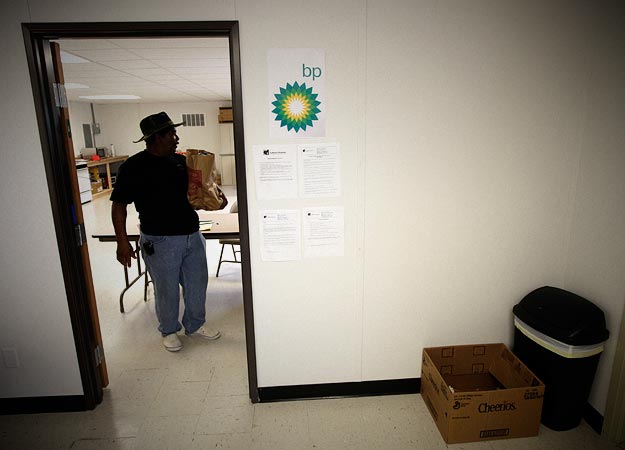 Fisherman James DeMolle holds a bag of groceries at a food distribution site run by Catholic Charities Wednesday, June 23, 2010 in Pointe a la Hache, Louisiana. DeMolle, who has only worked sporadically since the Deepwater Horizon oil spill, received some dried red beans, rice and other staples from the site. (AP Photo/Gregory Bull) 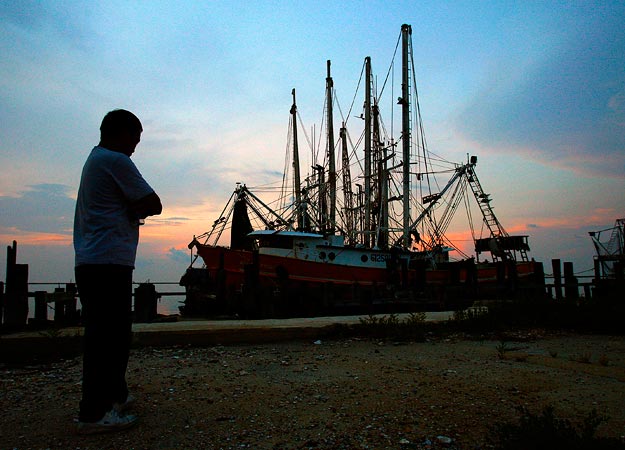