Browse the article Why do groups like PETA oppose the Iditarod? 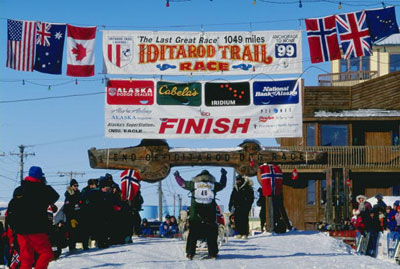 With dogs hitched by rope lines to a sled, competitors in the Iditarod Trail Sled Dog Race set out across Alaska for a roughly 1,100-mile journey over snow and ice in frigid temperatures every March. The test of dog and human is a commemoration of a 1925 piece of Alaskan history, in which diphtheria serum was transported via sled dogs from Nenana to Nome to stop an outbreak.

Traditionally, sled dogs filled utilitarian needs, but sled dog racing began in Alaska in 1908 with the All-Alaska Sweepstakes. Other sled dog contests were held throughout the 20th century. In 1973, the Iditarod Trail Sled Dog Race first set off, and its popularity grew over the years.

­By the late 1980s, the Iditarod had become famous with the help of publications and movies on sled dogs. More people saw the business opportunities associated with the race, and the race seemed to shift from a wilderness adventure to a competitive sport. The Alaskan tradition of mushing and the camaraderie among mushers on the Iditarod trail were important elements of the race in the early days. But over the years, more people sought to win the race, and the prize winnings increased. In 1995 someone from outside Alaska won the race for the first time, demonstrating that the race's popularity had reached beyond the 49th state.

The harshness of the race -- not only the brutal weather conditions but the extreme distance and the fast pace with very little rest -- have made some question the competition's impact on the sled dogs. With more money at stake and mushers taking the race more seriously, does that mean that sled dogs are taking on bigger risks, and perhaps being abused, in a no-holds-barred contest? Some animal rights groups protest that the Iditarod takes things too far, that in addition to incidents of animal abuse by mushers, the dogs are pushed beyond their limits. And, activists, argue, there's no telling what happens to the dogs before and after the race.

So what effect does the intensity of the Iditarod race and its impact on the sled dogs? Read on to find out a little about the life of a sled dog. 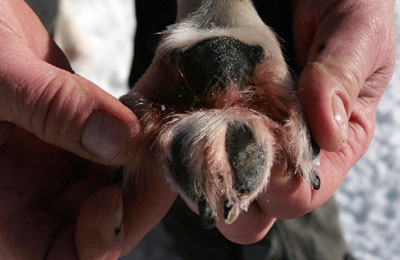 Raw paws are just one health hazard for sled dogs, which can run across hundreds of treacherous miles of rough ground over the course of a race -- not to mention the training they do beforehand.
Jim Watson/AFP/Getty Images

While the dog drivers, or mushers, who enter the Iditarod Trail Sled Dog Race certainly play a role in the competition, the sled dogs are a crucial component of the team.­

Sled dogs are bred for their speed and endurance. Training starts when dogs are a couple months old, and begins with getting them used to a harness and collar. As they get older, they learn verbal commands and start to pull light loads. Most sled dogs competing in the Iditarod are between 2 and 10 years old. They train year-round, with the most intense training starting in the fall before the March running of the Iditarod. Distance runs ramp up as the race nears, and by the start of the Iditarod, most dogs will have covered around 2,000 or 3,000 miles.

Because a team competing in the Iditarod must have between 12 and 16 sled dogs, most of the dogs live in kennels. A kennel might house as few as 20 or as many as 150 dogs, but a typical kennel has around 75. Living conditions at the kennels vary, but some dogs are housed outdoors, each with his or her own dog house and a tether or chain. Some kennels practice culling -- killing a dog if it is sick, too old, deformed or won't make a good sled dog. The amount of nutritional and veterinary care, exercise and the cleanliness conditions vary by kennel.

Sled dogs need to eat around 10,000 calories per day during the Iditarod race. The race rules say that "an adequate amount of food is required to be shipped" to specific race checkpoints [source: Iditarod]. It is up to each musher to determine exactly what type of food and the amount to be shipped. Volunteer veterinarians along the race route perform exams and check log books for each dog kept by the mushers.

­In the Iditarod, dogs run for hours at a time over snow, over ice and through water. They are well equipped to live in cold climates, with thick coats, wide, flat feet and tails that cover their noses for warmth when they sleep. Still, they are exposed to a range of hazards, from dog fights and tangled lines to getting lost and moose attacks. In a USA Today column, Jon Saraceno wrote of possible injuries for sled dogs: "In addition to fluid in the lungs, bleeding stomach ulcers occur, as does general cramping, dislocations, fractures, muscle and tendon tears, tendonitis, dehydration, hypothermia, raw paws, penile frostbite and viruses [source:USA Today]." In addition, they can die from "exertional myopathy," or running themselves to death. It's estimated that more than 120 dogs have died during the Iditarod since its inception in 1973.

When a sled dog is about 10 years old, or has injuries or other circumstances that prevent it from racing, it is retired. Some mushers keep retired sled dogs as pets, some sell or give them to other people, and some are scooped up by rescue groups to be cared for and/or placed in a new home. Life expectancy for sled dogs is around 12 to 15 years.

While many sled dogs are well loved and cared for, there are some documented cases of sled dog abuse by Iditarod mushers, including:

In the next section, we'll learn about where various organizations stand on the Iditarod. 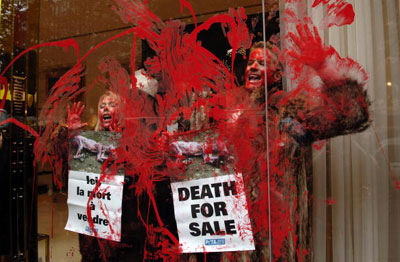 People for the Ethical Treatment of Animals activists protest in the shop of French designer Jean-Paul Gaultier. The animal rights group stages protests against stores, restaurants and events all over the world.
Eric Feferberg/AFP/Getty Images

Animal rights' organizations have long been critical of the Iditarod Trail Sled Dog Race, pointing to dog deaths and injuries as signs that the race is inhumane. And while the bulk of race coverage doesn't concentrate on the treatment of sled dogs, there have been some articles published. USA Today writer Jon Saraceno has written several columns critical of the race and dubbed it the "Ihurtadog" [source: USA Today].

According to Kelly E. Connolly, the Humane Society of the United States (HSUS)' issues specialist on companion animals, "The HSUS opposes the Iditarod in its current form -- or any other mushing event in which heavy emphasis is placed on competition and entertainment and in which dog deaths and injuries are regular consequences." The HSUS sees no problem with noncompetitive mushing and competitive events where the welfare of dogs is ensured [source: Connolly].

­People for the Ethical Treatment of Animals has been vocal in protesting the Iditarod over the course of the group's history. Lisa Wathne, spokeswoman for PETA, says, "It's a long and grueling race that's completely inappropriate and harmful to the dogs who are forced to participate" [source: Wathne]

In 1999, retired schoolteacher Margery Glickman founded the Sled Dog Action Coalition (SDAC), an all-volunteer group working to better the conditions for Iditarod dogs. Glickman points to a long list of injuries (and deaths) that dogs face by being made to race. By her count, at least 133 dogs have died in the Iditarod, and, she says, there's no telling how many die in training or post-race. Glickman also says that kennels are often overcrowded and that some use methods such as culling (killing unwanted dogs) and tethering (keeping dogs on short chains). Simply put, she says, "Iditarod dogs are prisoners of abuse" [source: Glickman].

The Association of Veterinarians for Animal Rights (AVAR) opposes all forms of dog racing. They see it as exploiting the animals for entertainment and competition purposes. "We think the inherent cruelties involved in racing (including high probability of injury) make it an unacceptable practice, so there are no sled dog races that we would sanction as acceptable," says Pam Runquist, AVAR director of companion animal issues [source: Runquist].

In addition to direct race protests, animal activists have also leaned on corporations that sponsor the race to pull out. In the early 1990s, national companies including Chrysler, Iams and Timberland dropped their sponsorship of the Iditarod, possibly because of pressure by animal rights groups. The Iditarod Trail Committee instead relied on local sponsors from Alaska to support the race.

And the Iditarod is not the only race to be criticized. While the famous race has drawn the most attention from animal rights groups, other similar races are considered just as unacceptable to animal rights activists. PETA and HSUS oppose the Yukon Quest (a 1,000-mile race in Alaska and Canada) too, and most groups say they oppose any race that puts the dogs at risk.

While it hasn't stopped dogsled racing entirely, the combined pressure of animal rights activism has had some effect. Read on to see how some mushers' groups have responded to criticism and what racers are doing to improve dog safety. 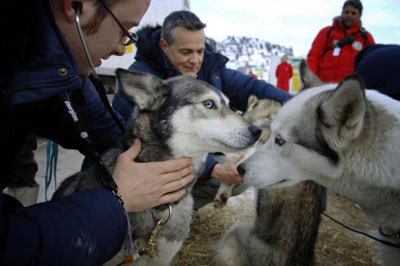 The animal rights groups desiring major changes in the way the Iditarod and other sled dog races are run have made some strides over the years. In the early 1990s, suggested changes from the groups -- including more frequent veterinarian exams and requiring straw beds for dogs at checkpoints -- were implemented by the Iditarod. As recently as 2007, the Iditarod Trail Committee's board of directors considered proposals such as holding any musher with a dead dog in a checkpoint for 24 hours after the death; the rule change did not pass.

According to the 2008 rules for mushers competing in the Iditarod, "There will be no cruel or inhumane treatment of dogs. Cruel or inhumane treatment involves any action or inaction which causes preventable pain or suffering to a dog" [source: Iditarod]. The rules go on to outline dog care, the handling of dogs that are dropped from the race or die, banned drugs, veterinary exams and food requirements. Mushers who violate the rules may be penalized by warnings, monetary penalties, time penalties, censure, withdrawals or disqualification, depending on the infraction.

Meanwhile, mushers and those involved with the Iditarod race counter that the sled dogs are well cared for. They say they take better care of the dogs than they do of themselves, and that dogs that are abused won't perform well so it wouldn't make sense to mistreat them. They say that the dogs love to run, and it would be hurtful to prevent them from engaging in their natural inclination. Some view the criticism as coming from outsiders who simply don't understand the legacy of mushing in Alaska.

Iditarod race materials point to measures that are taken to ensure the dogs' well-being:

The Iditarod materials state, "The result of these efforts is a level of health care and screening that even an overwhelming majority of the human population will never experience" [source: Iditarod].

­The organization Mush With PRIDE (Providing Responsible Information on a Dog's Environment) ­was set up in 1991 to address concerns about the care of sled dogs and public perceptions of mushing. Guidelines created by the group specify standards for kennels, as well as dog care (housing, food, water, exercise, training, puppy raising, veterinary exams).

There are also some races touted as being more dog-friendly, including the International Pedigree Stage Stop Sled Dog Race (IPSSSDR), an eight-day race from Wyoming to Utah that stops each night, allowing dogs to rest.

Despite modifications to the rules, opponents of the Iditarod Trail Sled Dog Race want an end to the competition as it's held today, and they plan to keep protesting it until that happens.

For lots more information on the Iditarod, sled dogs and related articles, please see the next page.