Rabies in Humans: The Third World 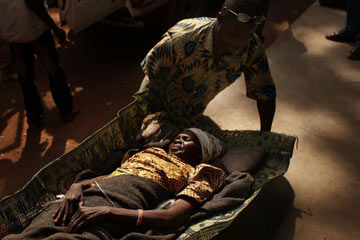 A woman is brought to a health clinic with an advanced case of rabies in Kabo in the northern Central African Republic.
Spencer Platt/Getty Images

Between 30,000 and 70,000 people every year contract rabies [source: McPhee]. It's a staggering number and means, on average, that a person dies of rabies about once every 10 minutes. But this plight isn't spread equally. Things are much more optimistic for First World nations than they are in developing countries. The United States, for example, has an average of only two or three human rabies cases per year, thereby contributing less than 1/10,000th of the total number of fatalities of the global epidemic [source: CDC].

Not surprisingly, the countries where rabid dogs are a problem are the same ones that have high rabies mortality rates. The majority of annual human rabies deaths occur in developing nations, where vaccination programs are limited or nonexistent. The World Health Organization (WHO) cites rabies as one of the "most neglected among today's neglected global health problems" [source: WHO].

Ironically, these are the very same countries and people who can't afford to fight the disease. The New York Times estimates that the annual global cost of rabies is approximately $583 million [source: Judson]. That may sound like a lot, but it's really not that much money when considered on a global scale. What it really comes down to is the $40 cost of each vaccine. Unfortunately, for those living in the areas that need the greatest help, such as in the rural impoverished areas of Africa and Asia, coming up with $40 for each shot is next to impossible. (Rabies vaccines are much more expensive in developed countries because the series of shots contains a dose of immunoglobulin, which protects the body until it has created antibodies.)

Unfortunately, even if the shots were free, the vaccination schedule would still pose a problem for many rabies victims in the rural areas of afflicted developing countries. Frequent trips to a clinic to receive treatment are time consuming and often force victims to miss much-needed work. Organizations like RITA (Rabies in the Americas) and RabiesFreeWorld are doing their part to help eradicate the disease, but, despite the relatively low cost associated with doing so, there is still a long way to go.