Which species are violent for sport and why? 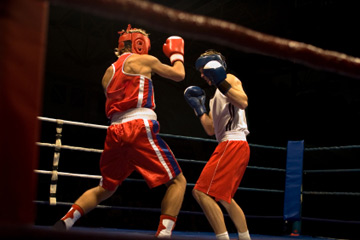 Are humans the only animals that are violent for sport? See more pictures of sports.
© iStockphoto.com/thinkomatic

If you've ever seen a domestic cat catch prey like a mouse or a bird, you might call the way it handles the prey "playing." Cats may keep prey alive after catching it rather than killing their catch immediately. They might swat at it or hold it down calmly. It looks as if the cat is having fun, toying with its prey in a malicious manner.

That's not really the case. In truth, cats wear down their prey to avoid sustaining injuries. Mice and rats can bite -- birds can peck. Rather than playing with the prey for amusement, cats wear down their victims so that they're too tired to fight back once their captors are ready to finish them off [source: Turner, et al].

Killer whales display a similar behavior. Scientists have observed killer whales tossing California sea lions out of the water and into the air. The sea lions may fly dozens of feet before crashing back to the water. A human observer might anthropomorphize this behavior, attributing it to mean-spirited sport. But like domestic cats, killer whales will attempt to disorient and incapacitate prey to avoid injury to themselves [source: Ternullo and Black].

Animals display aggressive behavior for many reasons. Some, like the examples above, are predatory behaviors. Others are survival behaviors designed to establish access to resources like food, mates and territory. Animals might spar with one another to achieve dominance and lay claim to specific resources. But these are all behaviors the animals engage in to ensure their own survival and the propagation of their respective species.

We can only say for sure that humans engage in violence for sport. In some cases, we're violent toward other species for sport. Trophy hunting is an example -- hunters track and kill impressive specimens of animals and preserve them -- or parts of them -- as trophies. Another example is forcing animals to fight one another. From the medieval practice of bear baiting to sports like cockfighting and dogfighting, humans have inflicted violence upon other creatures out of enjoyment.

We haven't stopped there though. There are plenty of examples of sporting events in which humans are violent toward each other as part of a competition. Boxing, wrestling and mixed martial arts bouts are examples. This practice dates back centuries -- it's hard to imagine ancient Rome without thinking about the famous gladiator fights that would attract thousands of spectators.

What this behavior says about us as a species is a matter of debate. Is it wrong to engage in violence as sport? Should we abandon these activities for less violent ones? Or is this behavior an intrinsic part of what it is to be human? We don't have easy answers to these questions. It may be that as a species we will always feel a certain thrill when we witness violence as a sport.

Learn more about violence and human behavior by following the links on the next page.

Tapir: The Ancient Fruitarian With the Tiny Trunk
The Andean Condor: 100 Miles, 5 Hours, 0 Flaps of Its Wings
Baby Elephant Learns to Walk Again With Hydrotherapy