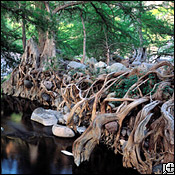 Different mammals thrive at different vertical levels in a tropical forest. Those of the canopy include insectivorous and fruit-eating bats, as well as primates, squirrels, and other climbing rodents. Their predators are likely to be snakes and raptors such as hawks and eagles.

Especially adapted to life in the trees are the monkeys, all of which can grasp and hold branches while in rapid motion. New World monkeys such as the spider monkey have the additional help of a prehensile tail — a tail that is also possessed by two rain-forest carnivores, the binturong and the kinkajou.

At ground level, anteaters, peccaries, capybaras, and the semi-aquatic tapir forage in the rich undergrowth, keeping an eye out for their felid predators — jaguars, clouded leopards, tigers, and ocelots.

Ready for the first mammal? Check out the Bald Uakari.

For Naked Mole Rats, Age Doesn't Increase the Risk of Death
How many bugs do I eat every year?
Sphynx Cats Are Surprisingly Sweet and Cuddly