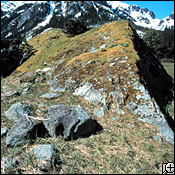 Finnish for "barren land," tundra is a band of sparsely covered land bordered by boreal forests to the south, permanent ice to the north. Bitterly cold, dark winters and minimal precipitation make life difficult here. Summers are brief, but the long hours of daylight nourish a mantle of plants that help support wildlife.

Within the tundra, there are three distinct vegetation divisions. The southern tundra, also called the low arctic, sustains woody plants, including scrubby willow and birch, and poorly drained soil creates extensive bogs. In the middle arctic, dwarfed woody plants grow close to the ground to avoid strong winds. In the high arctic, moss and lichen, as well as some hardy herbs, cling to bare rock. Few mammals live this far north, and those that do, such as thepolar bear have had to make significant adaptations to survive the cold.

The mammals of the tundra include both migrants and residents. Among the migrants, the caribou stand out. Large herds still make the journey of several hundred miles from their winter habitat in the coniferous forests farther south to spring and summer grazing grounds on the tundra.

Resident mammals rarely hibernate because the summer isn't long enough to accumulate sufficient fat reserves. Instead, burrowing under the snow has been perfected, particularly by the collared lemming. The lemming is also the only rodent with a pelage that changes to an all-white winter coat. Other tundra residents that change color with the snow include the arctic fox and the arctic hare.

Ready for the first mammal? Check out the Arctic Fox.