Browse the article The Brown Recluse Spider: Its Reputation Is Worse Than Its Bite 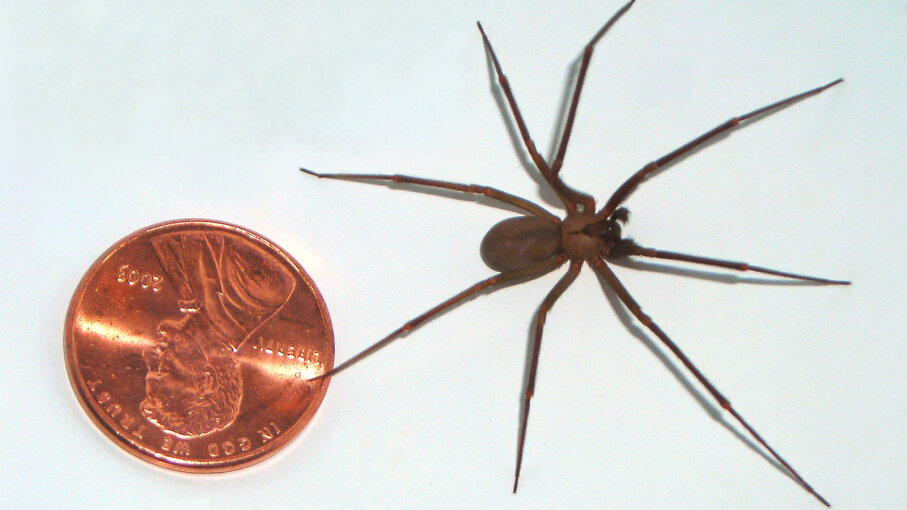 The infamous brown recluse spider (Loxosceles reclusa) prefers to be left alone, will retreat if approached and will bite only if trapped, threatened or pressed up against the skin. Wikimedia Commons

If you live in the United States, you've probably heard of the brown recluse spider. Probably the younger sister of your childhood best friend was bitten the summer she was 10 and she was in bed for a week and it's a lucky thing she didn't die. Or maybe your neighbor found a spider in her bathroom and posted a photo on Facebook and somebody "who would know" confidently identified it as a "for sure" brown recluse, and she's probably going to have to find a new place to live now.

While it's true the venom of a brown recluse spider (Loxosceles reclusa) can cause nasty necrotic skin lesions in some, and could possibly be deadly for a minute portion of the population, it's pretty unlikely that any of the stories you've heard about brown recluses are true — even if they happened to your dad's cousin.

Recluse spiders belong to the genus Loxosceles, meaning "crooked legs," so named because their legs look like a bunch of old, bent-up metal coat hangers lying in a heap. They're a hunting spider, meaning they don't sit around in a web waiting for their supper to come to them — although they get around on strands of silk and make "silken retreats," or little shelters to hang out in, they hunt their prey down on foot. Their ancestors were cave spiders, so in the wild they like the dry underneath surfaces of rocks, bark, shingles, woodpiles, etc. But like rats, racoons, flies and house sparrows, brown recluses are synanthropic, meaning their numbers increase in association with humans — and human habitations are actually very much like caves. A brown recluse loves nothing more than to lay her egg sac on the dry underside of the flap of a cardboard box and while away the hours guarding it in the eternal twilight of your attic.

But that doesn't mean brown recluses are everywhere.

"The distribution of brown recluses in the U.S. is a little like a rain cloud over the midwest," says Richard Vetter, a retired technician in the University of California Riverside Urban Entomology Department and author of The Brown Recluse Spider and articles in two medical journals — one in The New England Journal of Medicine and one in JAMA Dermatology — that have changed the way doctors diagnose spider bites. "If you're standing in the center of the storm — in Kansas or Oklahoma — you're going to get very wet, a lot of water droplets are going to hit you. If you're standing at the edge of the thunder shower in Georgia, the droplets will be much fewer and farther between."

In one 2009 paper, Vetter and his coauthors discovered that at the southeastern edge of their range in the state of Georgia, only 25 brown recluses could be found over the course of a five-year search. Compare that with the one Kansas residence in which 2,055 brown recluses were collected by the homeowner over the course of six months. The homeowner lived in the house for 11 years before knowingly sustaining a brown recluse bite, which ended up being asymptomatic.

"She reached inside a shirt, felt a pinch and the spider fell out," says Vetter. "She says she took a Benadryl and went on with her day. She was fine. I'm not sure the Benadryl did anything."

Spiders Are Difficult to Identify

And yet, we've all heard a first- or second-hand brown recluse horror story. According to Vetter, this is partly due to the fact that most people don't know the first thing about identifying spiders.

"I did a study where I got people to send me brown recluses they found from all over the country. If you thought it was a brown recluse, you stuck it in an envelope and sent it to me," he says. "Over four-and-a-half-years I was sent 1,800 specimens representing 158 species — some were pseudoscorpions, I got some granddaddy longlegs, a little of everything. Basically, if it has eight legs, people think it's a brown recluse."

Not everyone who is bitten by a brown recluse experiences a reaction — not by a long shot. In fact, 90 percent of all brown recluse bites do absolutely nothing. Just about 10 percent of cases result in a necrotic skin lesion — rotting flesh — that may require a skin graft, but usually heals up completely by itself. In much less than 1 percent of cases — usually in small children — the reaction to brown recluse venom becomes systemic, destroying red blood cells and causing toxic backup in the kidneys. In these cases, hemoglobin is passed into the urine and pee comes out black. If this happens, the patient could die within 12 to 30 hours — even before anything shows up on the skin around the bite area. So, if you notice your or your child's pee is black, get to a hospital right away. According to Vetter, dialysis and hydration should clear it up if caught in time.

"Even though fatal brown recluse bites are unbelievably rare, that's what makes the news," says Vetter. "Say you know nothing about car accidents and all you know about them is what you've seen on the news. The only car accidents anybody reports on are the ones that involve fatalities, so if you don't know better, it's easy to believe that all car accidents kill people. The truth is, most of the time somebody just gets a fender bent in a parking lot and drives away."

Also, there's the problem of misdiagnosis. According to Vetter, many physician diagnosed spider bites are actually not spider bites at all:

"Bacterial infections, fungal infections, all kinds of viruses are misdiagnosed as brown recluse bites," he says. "Once I was called by a military base in the northeast because all the soldiers were coming down with these inflamed skin lesions — they were trying to get a permit to spray for spiders. The description of the lesions didn't sound like necrotic brown recluse bites at all — they were swollen and red, and necrotic recluse bites become sunken and blue. I told them as much and a few months later they called back to tell me it was actually MRSA, a bacterial infection, going around the base. But, you know — people are very prejudiced against spiders."

Learn more about spiders in "Common Spiders of North America" by Richard A. Bradley. HowStuffWorks picks related titles based on books we think you'll like. Should you choose to buy one, we'll receive a portion of the sale.

Now That's Interesting
About 40 different medical conditions are commonly misdiagnosed as brown recluse bites, from vascular disease to leukemia. Many of these are much worse than a recluse bite could ever be.