Do black widows eat their mates?

Browse the article Do black widows eat their mates? 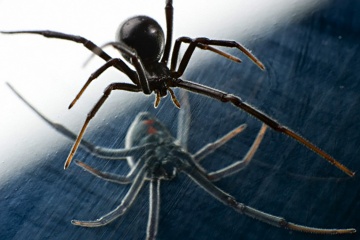 Of course female black widow spiders eat their mates. Why else would we call them black widows? Surely we wouldn't name a species of spider and stick to it without a fair amount of scientific vetting and confirmation?

Uh, not quite. If there's anything you can take away from studying animals, it's that their reputations are often conflated from teeny tiny details - or even exceptions - of their behavior. (Prime examples: Bears and sharks rarely want to eat you, manatees aren't mermaids and frogs refuse to turn into royalty no matter how hard you kiss them).

The black widow is no exception. The oft-repeated storyline goes something like this: The female black widow seduces her mate into breeding. In the warm afterglow of their assignation, she promptly eats the male before he can even ask her what's for breakfast and receive some funny punch line about how he's on the menu [source: National Geographic]. It's a terrific setup if you're writing a mystery novel, and don't be fooled: The premise is pretty close to fiction.

It's not that it doesn't happen. It's just that it only happens sometimes. (Which, let's acknowledge, may be cold comfort to the male spider.) But really, don't start protesting on behalf of male spiders everywhere, because the incidence is not overwhelming. It basically boils down to the fact that not every black widow is alike. No, we're not just talking about their souls, hopes and dreams. We just mean that there are many different species of black widow spiders. Some of these species have shown cannibalistic mating rituals; others haven't [source: Crawford].

To be fair, there are some black widow species where mating cannibalism occurs often, even outside a laboratory setting. (And do keep in mind that observing black widows mating in a lab where nobody can escape is way different than observing them in nature.) There are three known black widow species in North America, and only one has occasionally demonstrated murderous mating. The other two? Nobody's ever observed the females going fatal in nature [source: Crawford].

Another reason people might assume that black widows want their partners on a plate: Certain types of female black widow spiders weigh 10 to 160 times as much as males [source: Crawford]. It might give folks the (false) impression that black widows are hungry for anything and/or throwing their brute strength around.

But we know the truth. Yeah, it might happen that occasionally a female gets a little carried away in the heat of the moment. But by and large, it's people who are spinning this web of lies.