Do we really swallow spiders in our sleep?

Browse the article Do we really swallow spiders in our sleep? 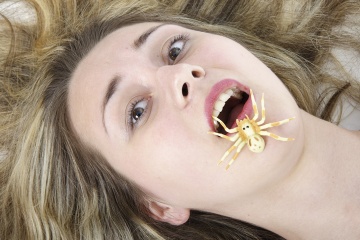 Spiders are creepy and crawling, but their choice of residence isn't necessarily your mouth -- especially while you're sleeping.
Holger Wulschlaeger/Thinkstock

Humans swallow an average of eight spiders each year while sleeping! The average person swallows 52 spiders over the course of a lifetime! These so-called facts are so widespread that it's hard to believe they're completely inaccurate.

Fact is, the odds of swallowing even a single spider over your entire lifetime are so low that they're virtually zero. In fact, it's extremely unlikely a spider would even approach a sleeping human, much less crawl into their open mouth and wait to die.

While just over one in four people admit to a fear of spiders and other insects, spiders are actually much more afraid of you than you are of them [source: Brewer]. Think about it -- the spider uses vibrations to sense danger. A sleeping human is nothing but noise and vibration, from your breath and heartbeat, to tossing and turning, to snores, snorts and other sounds. Everything about the human at rest signals for spiders to steer clear, giving them no incentive to creep into your bed during the night. Instead, they prefer to hang out in quiet, unoccupied parts of the home or spend their time tending to their webs [source: Sneed].

But what if you happen to come in contact with a spider whose ability to sense vibrations was a little off -- or even worse, a suicidal spider who was looking for a way to end it all via a simple swallow? Sure, it's possible that a spider who was going against every natural instinct could find his way into your mouth, but it's still extremely unlikely.

First, you'd have to have your mouth open fairly wide while you snooze, which is far from a universal trait. Next, you'd have to find a way to sleep through the sensation of a spider crawling its way across your face and into your mouth. Finally, you'd have to actually swallow while sleeping, which is not automatically going to happen without a little effort on your part [source: Soniak]. Hopefully, the spider would change his mind or get bored and crawl back out of your mouth before the stars could align enough for all of these events to occur.

Still afraid to fall asleep lest you end up ingesting a spider or two? Relax -- there's not a single reliable report anywhere in a scientific or medical source to prove that anyone has ever swallowed a spider while sleeping, much less eight per year [source: Burke Museum of Natural History and Culture].