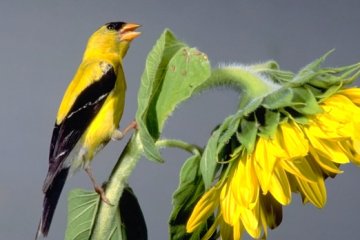 Bird Spotting: The bright yellow plumage of male birds give the American goldfinch its name. A black forehead and black wings with white accents stand out against the yellow body. Unlike most birds, however, the male will become duller and grayer once breeding season is over. Females are never as colorful as the male, but during the nonbreeding season, the hue of her feathers will be taken down a notch, becoming more of a pale yellowish brown.

Nesting: The American goldfinch builds its nest from grass, bark strips and soft plant fibers. The completed cup is then saddled to a branch of a small shrub using spiderwebs. Nest building begins in late June or early July when most other birds have already finished breeding. The American goldfinch lays between four or five pale bluish-white eggs each season.

Bird Bite: The American goldfinch is mostly monogamous, although occasionally a female will leave to find another mate after producing her first brood. She leaves her mate behind to tend to the offspring.

Backyard Tip: The American goldfinch frequently leaves its weedy refuge to feed at bird feeders. These birds can be found setting up house in pussy willows, and the Alaskan paper birch and slippery elm provides its favorite food.