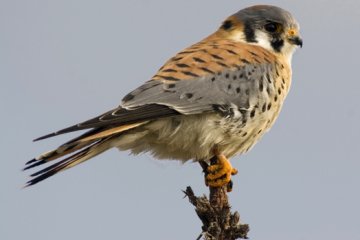 Bird Spotting: This small, but colorful falcon is a bird of prey or raptor. Wings of the male are a blue gray. The back and tail are reddish brown and the chest is tan with streaks of black. Rusty plumage with dark streaks identifies the female bird. Both sexes have two black stripes on the face.

Habitat: The American kestrel feels at home in open areas, such as meadows, grasslands and deserts. They can also be found in urban and suburban areas.

Nesting: American kestrels set up their home in natural or man-made cavities without the addition of nesting material. Four or five white or pinkish eggs, blotched with brown, compose a clutch.

Bird Bite: American kestrels have become adapted to city life where they prey on house sparrows.