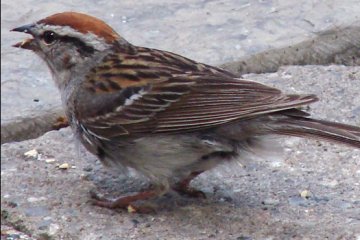 Bird Spotting: This small sparrow is mostly brown with streaks of black. The chest, sides of the face and rump are gray. A distinctive black line runs through the eye, which is set off by a white line above the eye. Males and females look very similar although the female is somewhat duller.

Habitat: Chipping sparrows spend winters and summers in grassy woodlands, along rivers and lakes, and even in city parks.

Nesting: Grass and plant stems make up the nest of the chipping sparrow. The completed construction is usually placed in a small tree or shrub. Three to five pale blue eggs spotted with brown form a clutch.

Bird Bite: To create a comfortable bed for their offspring chipping sparrows at one time lined their nests with horsehair. As the horse population dwindled in the sparrow's habitat, this bird had to become inventive. Plucking strands of hair from sleeping dogs has become one new source.

Backyard Tip: Nests of the chipping sparrow can frequently be found in the dense branches of the eastern red cedar.

Why Mockingbirds Mock
Why Birds of a Feather Mob Together
Oh, Birds! Please Don't Fly Into Our Windows