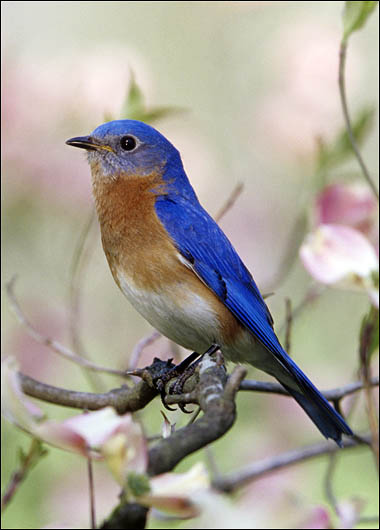 Bird Spotting: True to its name the male eastern bluebird is colored a brilliant blue along its back, wings and tail. The chest is reddish orange. Females are similar in appearance, but not quite as bright.

Habitat: This bird likes to spread its wings in open spaces and can be spotted in the skies above woodlands and farms with only a smattering of trees.

Nesting: Four to six pale blue eggs are laid in a loose cup of grasses and plant stems and lined with feathers and other soft material. Eastern bluebirds look for natural cavities, old woodpecker holes and bird boxes to set up house.

Backyard Tip: The eastern bluebird finds nest boxes a great place to raise a family. A good source of food is the fruit of the common sassafras tree. In the late winter the shining sumac becomes an emergency food source.