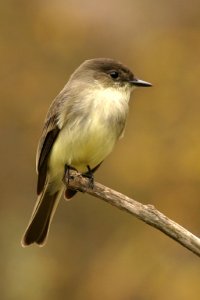 Bird Spotting: This flycatcher is a common sight in eastern North America. The plumage is dull olive green or gray along its back and wings and lighter on the chest and belly. The eastern phoebe has the distinctive characteristic of wagging its tail.

Habitat: The eastern phoebe can be spotted in open woodlands and forest edges usually near a body of water.

Nesting: These birds are relatively unafraid of people and will sometimes locate nests on buildings and bridges if other natural nesting sites, such as a cliff, are not available. Four to five white eggs are laid in a mud and grass cup lined with moss and hair.

Bird Bite: In 1804, John Audubon attached a silver thread to the leg of an eastern phoebe, thus making this bird the first to be banded and tracked from year to year.