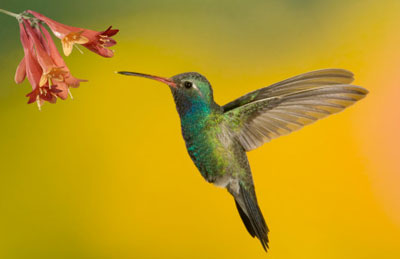 When early Spanish explorers first encountered hummingbirds in the New World, they called them joyas voladoras--or "flying jewels." But the hummingbird is more than just beautiful: Its physical capabilities put the toughest human being to shame.

The ruby-throated hummingbird--the only hummingbird species east of Mississippi -- migrates at least 2,000 miles from its breeding grounds to its wintering grounds. On the way, it crosses the Gulf of Mexico--that's 500 miles without rest. Not bad for a creature that weighs just an eighth of an ounce and is barely three inches long.

A hovering hummingbird has an energy output per unit weight about ten times that of a person running nine miles per hour. If a person were to do the same amount of work per unit weight, he or she would expend 40 horsepower.

Like bees, hummingbirds carry pollen from one plant to another while they are feeding, thus playing an important role in plant pollination. Each bird can visit between 1,000 and 2,000 blossoms every day.

See more hummingbird facts on the next page.