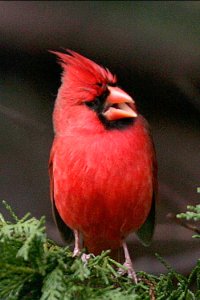 Bird Spotting: Northern cardinals are probably one of the most easily identifiable birds of all species. The bright red plumage, black face and stout red bill of the male bird stands out against just about any background. The female is usually a buff brown with only tinges of red on the crest, a much better camouflage

Habitat: The northern cardinal finds shelter in small trees along forest edges as well as in suburban areas.

Nesting: The nest of the northern cardinal is a deep cup built of twigs, leaves and plants, and is usually concealed in a thicket. The clutch is made of up three or four pale green eggs with reddish-brown spots.

Bird Bite: This bird gets its name from the red robes worn by Roman Catholic cardinals.

Backyard Tip: The northern cardinal frequents bird feeders, especially at dawn and dusk, and will visit yards with winterberry, roses, dogwood and juniper trees. The common greenbrier provides nesting places. The northern cardinal scavenges the peeling bark of the woody vines of the wild grape to build its nest.

Why Mockingbirds Mock
Why Birds of a Feather Mob Together
Oh, Birds! Please Don't Fly Into Our Windows