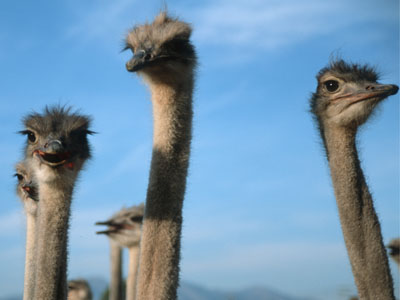 Male ostriches are polygamous, but they tend the nest with a single favored mate. This hen lays about a half-dozen eggs in a shallow depression in the sand, which takes her about two weeks. Other hens then add their own eggs to the nest, and once they are finished, the favored mate chases them off. The nest owners then incubate all the eggs: The female sits on them during the day, and the male takes a turn at night.
Karl Beath/Getty Images

The ostrich's intestines are 46 feet long--about twice as long as those of a human. This enables the bird to get the most out of the tough plants it eats. To help with digestion, it also swallows sand and small stones to break down food in its gizzard. Ostriches in captivity have been known to swallow just about anything that can fit down their gullet, including coins, bicycle valves, alarm clocks, and even small bottles.

The ostrich is the largest living bird in the world. An ostrich chick grows one foot taller each month until it is seven or eight months old. Adult ostrich roosters are six to ten feet in height and can weigh as much as 340 pounds. Because of their prodigious size, ostriches were occasionally used for riding or pulling chariots in ancient Egypt; the practice never really took off, because the ostrich has a nasty temper.

This great bird has only two toes; all other birds have three or four. Ostriches kick forward, not backward, because that's the direction in which their knees bend. Ostriches never need to drink water--some of it they make internally, and the rest is derived from the vegetation they eat.

Although the ostrich egg is the largest of all eggs, it is the smallest egg in relation to the size of the bird. A three-pound egg is only about 1 percent as heavy as the ostrich hen; by contrast, a kiwi's egg--the largest in comparison to the mother--is 15 to 20 percent of the mother bird's mass. An ostrich egg is equivalent in volume to two dozen chicken eggs.

Physiologus, an early Christian text compiled around the second century A.D. and a popular read in the Middle Ages, asserts that the ostrich incubates its eggs by staring at them. It was widely held at the time that vision was the effect of special "seeing" rays emanating from one's eyes; thus, the heat in the gaze of the ostrich hatched its chicks. The author of Physiologus presents this as an allegory to inspire worshippers to keep their eyes on Christ.