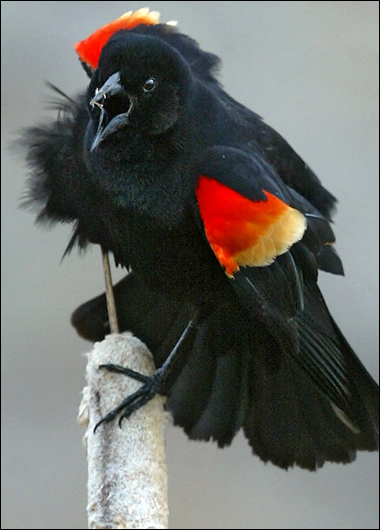 Bird Spotting: The differences between the male and female red-winged blackbird are striking. While the plumage of the male is entirely black except for two bright red shoulder patches, the female is a dusty brown and heavily striped.

Habitat: The red-winged blackbird is found across the United States in wetlands and grassy areas, including marshes and meadows.

Nesting: Between three and five pale blue eggs, spotted with dark brown and purple, are laid each season. The red-winged blackbird efficiently uses the materials at hand to build its nest. Constructing an open cup with marsh grasses or vegetation the nest is held together by mud. The inside is lined with grass.

Bird Bite: Reminiscent of a scene from Hitchcock's movie,The Birds, the red-winged blackbird likes company and in the winter can be seen congregating in huge flocks sometimes numbering in the hundreds of thousands.