There's a reason why the open bar at many weddings is situated near the dance floor. It takes courage to get out there and shake it, especially for those of us not likely to get cast as backup dancers in the next Bruno Mars video. Dancing well isn't easy, and many of us wind up looking something like this when we muster the intestinal fortitude to hit the floor:

The good news for folks with two left feet has long been that, as long as you stay off the dance floor, your inability to move to the beat won't do too much harm to your love life. Unless, that is, if you're a certain kind of animal — in this case, a Java sparrow songbird.

New research out of Japan's Hokkaido University recently published in the journal PLOS ONE shows that male Java sparrows (Lonchura oryzivora) have more luck with the female songbirds when they start the courting process by dancing.

Here's why that's important: Male songbirds have long been believed to use their tunes — a repetitive "chip chip chip" routine for Java sparrows — to attract female mates. The Japanese researchers found, however, that matchmaking among Java sparrows often begins first with something of a duet dance between potential partners. This runs counter to what's assumed about most songbirds: that they start courtship primarily with song.

Sure, the birds don't hold hands and move around in circles. Nor are they spinning around on the floor like break dancers. They do move in a sort of rhythmic pattern for a few turns before they get down to business if the female exhibits a copulation solicitation display (CSD) — basically an avian "Okay, I like your moves, now get over here and show me what else you can do."

What the researchers didn't explain is whether bird enthusiasts who want to attract Java sparrows to their porches might want to hang up a disco ball nearby.

Now That's Interesting
Many people know "Soul Train" as the greatest live dance program to ever hit the television screen. What's less known is that the 35-year-old funk dance fest was the longest-running syndicated TV show, until "Entertainment Tonight" dethroned it by entering its 36th year in 2016. 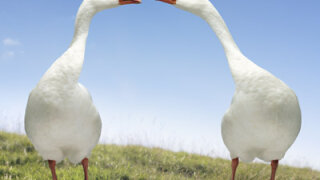