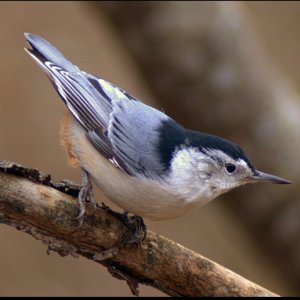 Bird Spotting: If you notice a sparrow-sized bird hopping down the side of a tree headfirst in search of insects, you've probably spotted a white-breasted nuthatch. Its dark gray or black cap with blue-gray coloring along its wings and white belly is also distinctive. The long bill, which can be either straight or slightly hooked, is the perfect tool for hammering open nuts and seeds.

Habitat: The white-breasted nuthatch is found mostly in deciduous and mixed forests.

Nesting: White-breasted nuthatches build their nests of twigs and grass, lined with feathers and hair, in the shape of a cup. Nests are placed in a natural cavity, a bird box or an abandoned hole excavated by other birds. The clutch consists of five or six white eggs that are lightly speckled a reddish brown.

Bird Bite: True to its name the white-breasted nuthatch gathers nuts and seeds. Jamming their finds into tree bark, the nuthatch can then leverage its long bill to hammer or "hatch" the food open.

Backyard Tip: These birds are familiar visitors to bird feeders, especially if other birds such as chickadees and titmice are in the neighborhood. One study speculates that the nuthatch sees these birds as protection from predators and, therefore, feels more comfortable approaching exposed bird feeders. The white-breasted nuthatch also enjoys the fruits of the shagbark hickory.

6 Facts About the Majestic Snowy Owl
The Fast and Furious Peregrine Falcon Is a Midair Hunting Machine
Why Are We So Fascinated With Owls?