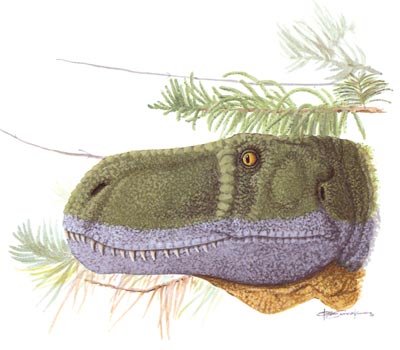 During the Cretaceous, dinosaurs that lived in the southern hemisphere were much different from their northern-hemisphere relatives. This was the result of the separation of the northern and southern land masses that began in the Jurassic Period. The recently discovered large theropod Abelisaurus comahuensis, from Patagonia, Argentina, looked a little like Albertosaurus from Alberta, Canada, particularly in its size and lifestyle. But parts of its skull led two Argentinian paleontologists to put it in its own family, the Abelisauridae. They think it was more closely related to the theropod Ceratosaurus from the Jurassic Period.

Only the skull of Abelisaurus has been found, but its body proportions were probably similar to other large theropods with the same size skulls (three feet long). Carnotaurus had slender legs with the front shorter than the back. Since Carnotaurus probably was an early abelisaurid, scientists suppose that Abelisaurus also had short front limbs and slender legs. Other details of its body are unknown.

The discovery of Abelisaurus is important because it shed light on many different southern-hemisphere theropods that are known only from fragmentary and puzzling material. These remains were difficult to identify and were occasionally used to suggest that Late Cretaceous tyrannosaurids from the northern hemisphere were in the southern hemisphere. Now that good abelisaurid material has been discovered and described, scientists have learned that many of those remains were abelisaurids. The possibility of southern-hemisphere tyrannosaurids is less likely.