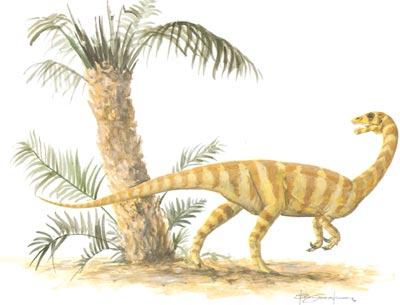 Anchisaurus was one of the earliest North American dinosaurs described. The first partial skeleton was found in Connecticut in 1818 and was first thought to be human fossils. Scientists recognized it as a dinosaur in 1885. Its name means "near reptile," because its body was close to the ground.

The skull of Anchisaurus was lightly built and triangular when viewed from the side. Other prosauropods, such as Plateosaurus, had more rectangular skulls with flatter snouts. Anchisaurus also differs from other prosauropods because the jaw joint was level with the lower jaw, rather than below the tooth row. Anchisaurus had blunt, diamond-shaped teeth that were less tightly packed and fewer than in other prosauropods. All this shows that Anchisaurus probably ate soft, easily chewed plants.