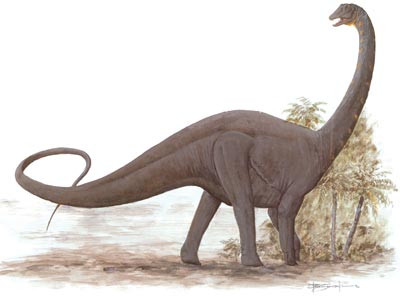 With a thigh bone (femur) over seven and a half feet long, longer than any other femur known, Antarctosaurus was a sauropod of spectacular proportions. Like other members of the Late Cretaceous family Titanosauridae, it had massive hips, tall rear legs, front legs nearly as tall as the rear, a long tail, and a long neck.

Antarctosaurus had a very small head, even for a sauropod. It was a plant-eater that had weak, peglike teeth. None of the preserved skeletons of Antarctosaurus are complete, so there is still much to learn about this animal.

Some paleontologists calculate that, based on the length of the limb bones, Antarctosaurus may have been larger than Brachiosaurus brancai, which is the largest dinosaur known from complete skeletons. But the two are not closely related; Brachiosaurus belongs to a different family and lived only in the Jurassic Period. Antarctosaurus was the largest dinosaur of the Late Cretaceous. It may have weighed as much as 80 to 100 tons and stood as tall as 15 feet at the shoulders.

Its name means "Antarctic reptile." It was found in South America, which in the Late Cretaceous was not far from the Antarctic Circle. Fragmentary remains from India have been found that may belong to Antarctosaurus, but scientists have not yet proved they belong to the same animal. A relative, Titanosaurus, has been found in India and Argentina. This may mean that Gondwanaland may have still had land connections at that time.