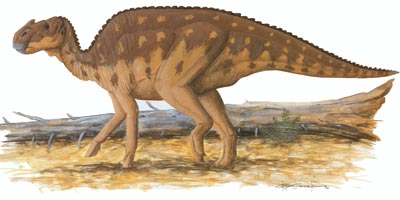 Aralosaurus is from Kazakhstan. It is known only from a nearly complete skull that is missing the front of the snout and all of the lower jaw, but no skeleton. This Late Cretaceous duckbilled dinosaur, whose name means "reptile from the Aral region," had a strongly hooked nasal arch in front of the eyes. This hook is more strongly developed than in any other hadrosaurid, including close relative Gryposaurus. Hadrosaurus may also have had an arched snout, but this part of the skeleton was not preserved. The hook of Aralosaurus was not only high, but also wide from side to side. The nostril openings beneath the arch were large.

The upper jaw of Aralosaurus was strongly built and relatively high. Like other duckbilled dinosaurs, it had many teeth for grinding plant food. Aralosaurus seems to have had as many as 30 tooth rows, with several teeth per row in each upper jaw. This arrangement was called the dental battery. The back of the skull was very high and wide. This suggests that there must have been long, massive muscles for chewing food.

Aralosaurus was first named and described in 1968. Since then, very little has been written about dinosaurs from this area of the world. Perhaps future efforts will tell us more about Aralosaurus, its anatomy, and its evolution.