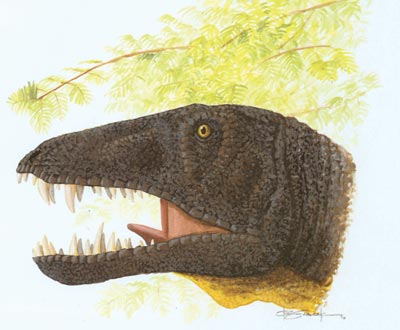 This carnivorous dinosaur was named more than one hundred years ago for an unusual tooth found in the Judith River Badlands of northern Montana. When it was discovered, much of the West was still wild.

Since its discovery, many paleontologists have offered different opinions about the tooth. Most accept the genus Aublysodon, although reluctantly. The reason is that during the early days of paleontology, many names of dinosaurs were given to very scrappy material. Some have argued that the single tooth, although unusual, might belong to a dinosaur already known.

The mystery was finally solved recently when a partial skull was found in Montana. The skull shows a long, low snout and an unusual step in the lower jaw. Unfortunately, so little is known of this animal that we don't know its size or weight. We do know that Aublysodon was widespread; its unusual teeth have been found in many states. 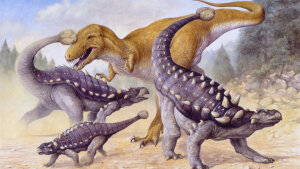