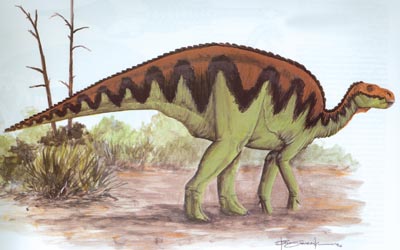 Very little is known about the earliest hadrosaurids (duckbilled dinosaurs). The best known of the earliest are Gilmoreosaurus and Bactrosaurus from the Inner Gobi Desert of the People's Republic of China. The rocks from which these two hadrosaurids were found are dated as early Late Cretaceous, but they may be somewhat later than that. Further research in the field and in the laboratory now being done in China, Canada, and the United States will provide more information.

Bactrosaurus ("reptile from Bactria") is known from many skull and skeletal pieces, but not a complete skeleton. Many of these bones are from juveniles and perhaps hatchlings, while others are from small adults. The pelvis, the limbs, and most of the important parts of the head, including the jaws with teeth, are known for Bactrosaurus.

For a long time, it was thought that Bactrosaurus was different from all other lambeosaurine hadrosaurids because it did not have a crest. That would have made it an unusual lambeosaurine. But recent work on both Bactrosaurus and Gilmoreosaurus has finally sorted out what bones go with which animal. This helped identify parts of the base of a crest-similar to the kind found on its close relative Parasaurolophus.

How Deinonychus Upended the Way We Look at Dinosaurs
Nigersaurus: The 'Mesozoic Cow' With More Than 500 Teeth
Scientists Unearth Another Archaeopteryx, an 'Icon of Evolution'