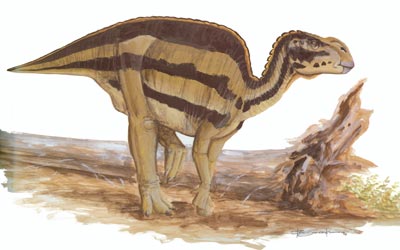 One of the most unusual duckbilled dinosaurs in the Late Cretaceous was Brachylophosaurus ("short-ridged reptile"). This hadrosaurid was discovered and named by Charles Sternberg of Ottawa, Canada, in 1953. In some ways it was similar to other hadrosaurids; it had many functional and replacement teeth and a flaring, ducklike snout. But Brachylophosaurus had a broad, flat, shieldlike crest on top of its head, directly above its eyes. This bony crest is unlike any other crest of any hadrosaurid.

Most crests of hadrosaurids, from simple arches and bumps seen in hadrosaurines to the elaborate hollow crests found in lambeosaurines, may be related to how the animal behaved. They might have been used in contests of strength to defend territory or females, or used for display to avoid contests of strength. Brachylophosaurus seems to have engaged in head-to-head pushing matches or outright butting. This behavior fits with what is known about other hadrosaurids.

Brachylophosaurus had many teeth behind its beak for chewing plant food. Like other hadrosaurids (and many ornithopods), chewing was done by an unusual movement of the upper jaws with the large jaw muscles at the back of the skull. When the upper and lower teeth came into contact, the upper jaw moved slightly to the side to allow the teeth to move past one another. In this way, these hadrosaurids were able to chew with a sideways motion, somewhat similar to how cows and horses chew. Muscular cheeks kept food from spilling out of the sides of the mouth.

Brachylophosaurus had very long arms; the reason for this is not known. They were not as long in its relatives Maiasaura or Prosaurolophus.