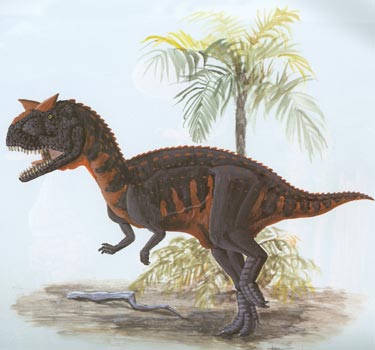 This recently described genus was an unusual theropod. Carnotaurus (its name means "meat bull") is known from a single, nearly complete skeleton that had skin impressions over much of the skull and body. It was so complete because it was preserved in a large concretion (a lump of rock that is harder than the rock around it) that protected the bones and skin impressions. It was found in Early Cretaceous rocks in the Patagonia region of Argentina.

Its skull had stout horns above its very small eye sockets. Its bladelike, serrated teeth were much like those of other theropods. The arms of Carnotaurus were short for its body size, but unlike Tyrannosaurus with its slender arm bones, the arms of Carnotaurus were stout. Its arms were so short that it almost looked like the hands were attached to the upper arm bone (the humerus). The bones in the back and tail (vertebrae) were also unusual; they look a little like the wings of a fantasy spaceship.