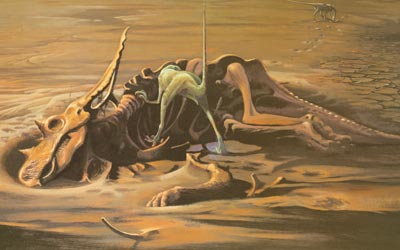 The first Chasmosaurus fossil found was part of the neck frill. It was unearthed in 1898 by Lawrence Lambe along the Red Deer River, Alberta. Lambe first thought it belonged to the genus Monoclonius, so he named it Monoclonius belli. Later, in 1914 after a more complete skull had been found by Charles Sternberg, Lambe realized that his original find was a new ceratopsian and renamed it Chasmosaurus belli.

Chasmosaurus had a very long frill with enormous fenestrae (openings) on its surface. The outline of the frill is indented, making it look heart-shaped when seen from above. It is the enormous, or "cavernous," fenestrae for which this dinosaur is named; its name means "chasm reptile."