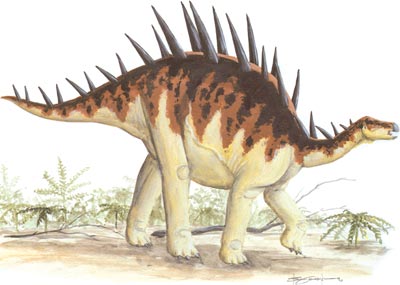 Also known as "Omosaurus," Dacentrurus was an armored dinosaur related to Stegosaurus. Dacentrurus had a set of prominent spikes on its tail, a feature for which this dinosaur was named. Its name means "very spiny tail."

As typical for all stegosaurs, Dacentrurus was a plant-eater that fed on low-growing vegetation. Its plates and spines were probably its protection from predators. The real function of its armor, and the armor on all stegosaurs, is often a topic of discussion by paleontologists.