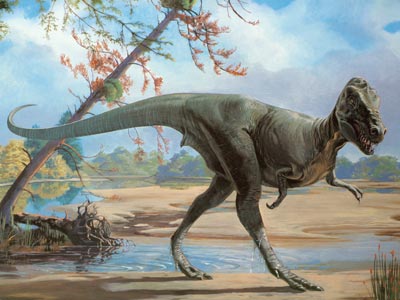 With its massive head and large teeth, there is no question that Daspletosaurus was master of its world. It got its name because of its ferociousness; its name means "frightful reptile." It had a huge body balanced upon two powerful back legs. The three-toed taloned feet (much like those of a modern bird) probably held the prey down while it ate. Like all tyrannosaurids, the front limbs were short and had only two fingers each.

Daspletosaurus lived at the same time as Albertosaurus. How two large meat-eating dinosaurs could have lived side-by-side is a mystery. Perhaps it was much like the African lion and the cheetah living together in East Africa today. These two cats have different methods of hunting, and they prey on different animals. The lion relies on stealth to get close to its prey (gnu, zebra, etc.), and the slender, fast cheetah runs down its prey. It is possible that Daspletosaurus, with its massive head and body, might have stalked the ceratopsians, while the more slender, quick Albertosaurus might have run down hadrosaurs. Daspletosaurus and ceratopsians are less common than Albertosaurus and hadrosaurs in the badlands of Alberta.