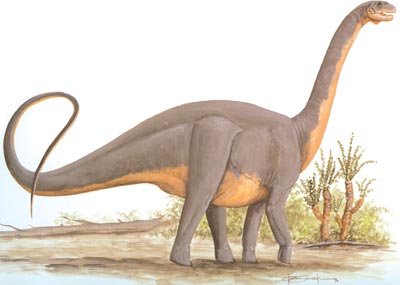 A rare Middle Jurassic sauropod from China, Datousaurus may have been an animal that traveled by itself and ate the leaves of the tallest plants in its environment. Its neck vertebrae were quite long, giving it a higher reach than Shunosaurus, an animal that lived at the same time.

The spines of some of the vertebrae at the base of its neck had a shallow channel for the attachment of muscles and ligaments that controlled the neck's movements. Its head was deep and boxlike. It looked a bit like the Late Jurassic North American sauropod Camarasaurus. Datousaurus may have been distantly related to Camarasaurus. Other features of its skeleton may mean that it was related to the diplodocid sauropods.

Only two incomplete skeletons of Datousaurus bashanensis, both headless, have been described since 1980. They were found in the Dashanpu Quarry, Sichuan Province. Since then, more material has been discovered. One skull probably belongs to Datousaurus, but scientists will not know until a skeleton is found with the head attached.