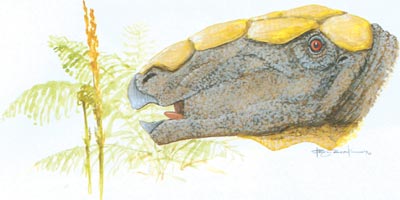 A recently named armored dinosaur, Denversaurus is based on a badly crushed skull from South Dakota. No other parts of the skeleton have been found, so it is difficult to estimate how long or heavy the animal was.

Denversaurus, along with Ankylosaurus, was found in the lower part of the Hell Creek Formation. Tyrannosaurus and Triceratops were also found in this formation. But unlike these animals, both ankylosaurs were only in the lower part of the formation. This suggests that some ankylosaurs became extinct long before the end of the Cretaceous. It is not known what caused their extinction, but it seems to be at the same time a number of other dinosaurs became less abundant.