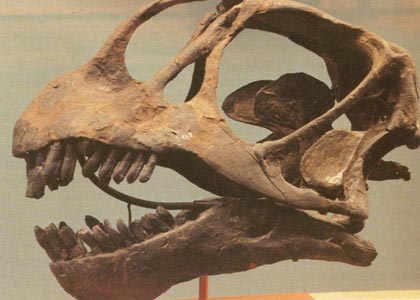 Our knowledge of dinosaurs comes from what they left on earth as fossils. But very little dinosaur material has been fossilized by nature, and then nature itself often becomes the fossils' enemy. Wind and weather can damage fragile fossils, but erosion also uncovers them for collectors and paleontologists.

Scientists study dinosaur skeletons to learn about the animals' behavior and appearance. The skull is especially important. A dinosaur's teeth can tell us whether it was an advanced or primitive dinosaur, whether it ate plants or meat, or even whether it ate soft or tough plants. Its skull will tell if it had a large or small brain or if it had good or bad eyesight, hearing, and sense of smell. The shape of a dinosaur skull can also tell us what other dinosaurs it was related to and where it fits in the family tree.

Though the skull is important, paleontologists can tell much about a dinosaur skeleton without a head; many skeletons are found without skulls. And there are other clues that dinosaurs left behind, all giving information about their lifestyles and habits. Scientists have discovered dinosaur trackways (fossilized footprints), nests, and eggs. But even with this information, there is much that will never be known. The fossil record is incomplete and can be misleading. Paleontologists continue to search, hoping to uncover other clues that will give them more information about dinosaurs.